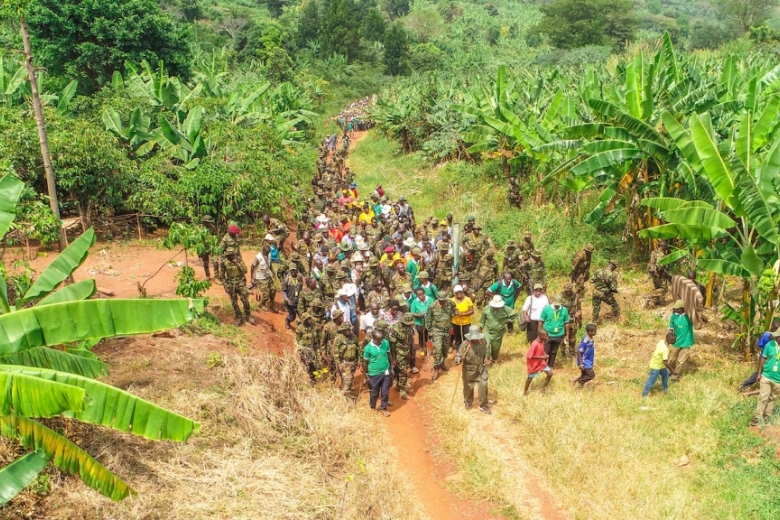 President Yoweri Museveni, the Chief Trekker of the ‘Africa Kwetu’ 195 Km walk that started over the weekend, continued with the 7-day journey from Bukomero Technical Institute in Kiboga District and was expected to camp at Ndiraweru village.

Prior to the Trek, President Museveni who camped at the late Ssetuba's home, in Kagogo last night, paid his respects to the deceased by laying a wreath on the grave. In his condolence message to the family, Mr. Museveni described the late veteran as a hero who gave shelter to him and his men during the liberation struggle.

"We were coming from Lwamata to Matugga. We stayed here and slept at his home and then left for Matugga the next day. The first time we passed here, nobody knew. After we got ammunition, we stayed here in the mountains and news came out that we were here in these hills near his home. The Tanzanians heard about it, came and killed him," the President narrated.

Before embarking on the 12 Km Trek, President Museveni explained to the trekkers that it was in Bukomero where Gen. Elly Tumwine organized one of their first ambushes that saw one of the Tanzanian lorries blasted. It was also at this place, he continued, Gen. Tumwine lost an eye during the war.

"It was from Bukomero that we abandoned the vehicles and walked 19 miles from here to Kaginzi because we didn't want to be seen by the enemy," he said.

Narrating some of his ordeals of the journey to the amusement of the trekkers, Mr. Museveni said that it was a hard journey for he lacked a blanket and a toothbrush to use.

"I tried to use the fire to warm myself to sleep but it couldn't help. I would get warm on one side and feeI cold on the other side. I then got a very smelly blanket but at the time it was the sweet smelly blanket. For toothbrush, there was a son of Dr. Sebuliba who had studied at Makerere. He donated to me his own tooth brush and I had to boil it and sterilize it," he said.

President Museveni, who energetically led the trek up the Kateera hill where he made several stopovers encouraged people to endeavour to increase their household incomes.

While at Kateera Church of Uganda grounds, President Museveni encouraged the people to always fear God because, he said, He is the source of wisdom and that if they trust Him, everything else will fall in place.

He thanked the parents of the Bazzukulu for joining arms with him during the liberation struggle and told them it was time for the Bazzukulu to fight against poverty.

"Tarmac roads cannot get you out poverty; otherwise this place would have no poor people. I also see electricity poles but they still won't get you out of poverty because you need money to pay for the bills. Government has done its part of developing infrastructure but you also must do your part of fighting poverty," he explained.

President Museveni again advised the people to take their children to school, saying a country cannot do well without educated people.