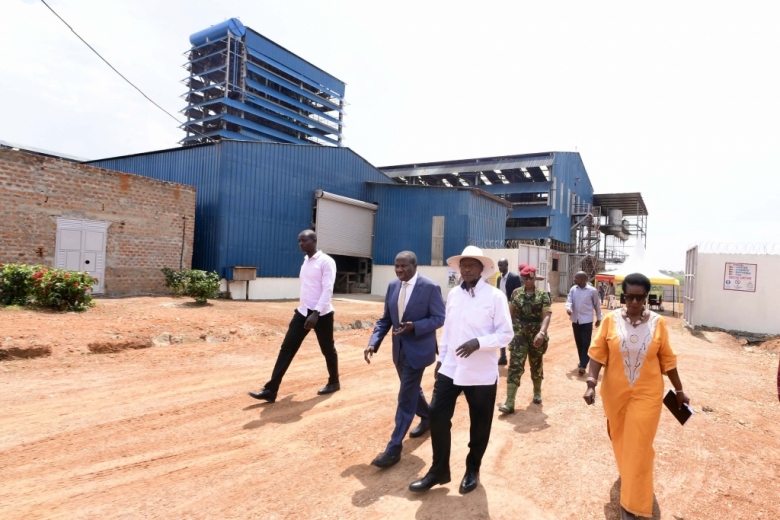 The President also launched the Green fuel Uganda project established by the factory, which produces energy stoves that use ethanol got from processed cassava. The e-stoves, which are ethanol powered, are deemed to be clean, safe, economical, environmental friendly and emission free. Each stove with a guarantee of lasting up to ten years is sold at Shs 250,000 while a litre of ethanol to power it costs Shs 3700 and lasts for one and half days.

If the project is sustainable, President Museveni noted, Uganda would be able to export fuel made from cassava to other countries. He urged farmers to work hand in hand with the factory owners to grow cassava for the continuation of the project and to improve their livelihood.

“Traditionally we used to cook with remains of the maize. We would produce maize, cut off the cob and use the rest of the parts to cook. But now this man here has said that you can get cassava, process it and get petrol out of it. This can help people in this district to get out of poverty,” he said adding, that farmers can also use the cassava residue to make animal feed.

On development, President Museveni called on the people of Nwoya and Ugandans at large to work well with other people regardless of their nationality or tribe and urged them to cooperate with the foreign investors.

“If you go to a developed country like America, you will find a lot of Japanese industries. When you see this factory here and you say the factory of India, it is wrong. Indian factories are in India. All factories in this country are ours. When they are counting our GDP they don’t count it as being in India. They count it as part of this country,” he noted.

President Museveni congratulated the people of Nwoya for waking up and advised them to form skilled-based SACCOs to which government would render support.

Earlier, Mr Krakel Praviin said the factory worth US$5.6million will require about 70 tones of cassava a day and 2,000 tones monthly. “The factory will buy both the fresh and the dry cassava. Fresh cassava will be bought at shs.180, 000 per ton and dry at shs.780, 000 per ton,” he said and appealed to farmers to engage in growing cassava as market is ready.

Commenting on the Cassava- Ethanol, the Minister of Trade, Industry and Cooperatives, Hon. Amelia Kyambadde, noted that if the ethanol project is capable of improving the live