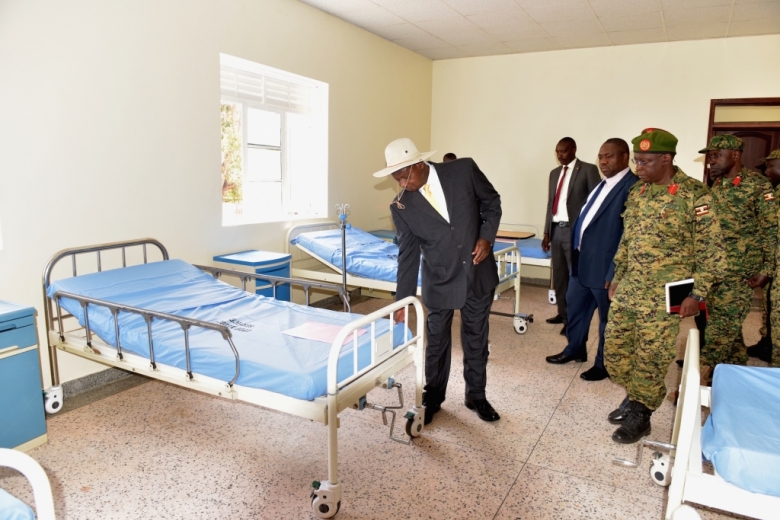 President Yoweri Museveni who is also the Commander in Chief of Uganda’s Armed Forces has hailed the UPDF leadership for using their own human resource to build infrastructure and save money through strengthening the health care capacity among the security forces.

The President who was en-route to Apach District to preside over this years’ Tarehe Sita celebrations made a stop-over at Bombo Military Barracks where he commissioned the newly built UPDF Officers’ Wing and Intensive Care unit.

According to Col. Bekunda – Besigye, construction of the medical facility cost Shs 925million and took one year to complete. He said the medical equipment will cost another Shs723m.

The  facility consists of the Intensive Care Unit (ICU), maternity and delivery room and general ward as well as VIP suits.

Brig. Dr. Ambrose Musinguzi, the UPDF Chief of Medical Services, 70% of the patients at the facility are civilians who are offered services free of charge.

President Museveni commended the work of the two core groups, the medical team led by Brig. Dr. Musinguzi and the Engineering Brigade led by Col. Bekunda, which he said has greatly reduced on the cost of construction done by hired contractors.

“All along I have been commissioning structures built by contractors and I have been asking when they (UPDF) are constructing theirs. Now that you have built it yourselves, am happy and congratulate you” he said.

He said the facility will help the institution in treating and handling their own patients in privacy without ‘advertising’, but also serve the local community.

“You have done well. You have done it yourselves and you will examine and treat our soldiers. You should continue to cover more areas of the body to handle issues of cancers, kidneys, Urinary tract diseases and heart diseases among others,” he said.

The Defense Minister, Hon. Adolf Mwesigye said the hospital was an important facility for the UPDF and for the country and that it will foster harmony and understanding between the military and civilians including through activities such as extending free medical care, responding to epidemics and disasters.