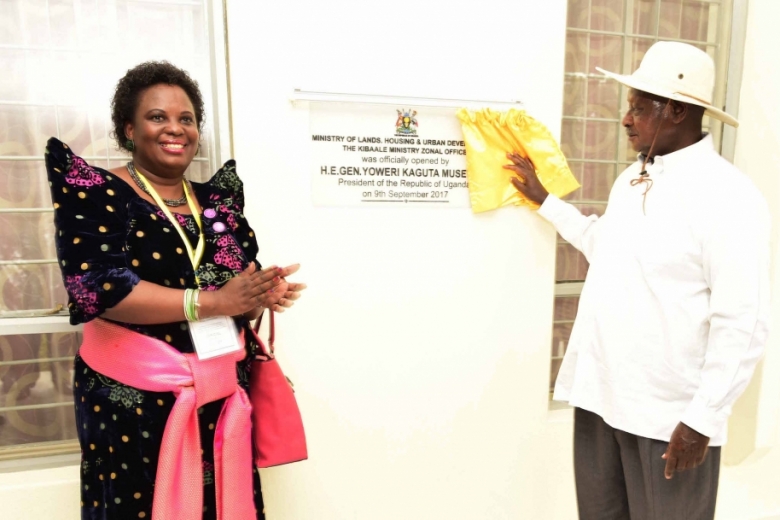 President Yoweri Museveni has called upon the people of Bunyoro Sub-Region to banish tribalism.

The President was speaking at the commissioning of the Ministry of Lands Kibaale district Zonal Office where he also handed over 254 land titles, under the Land Fund, to lawful owners.

The ceremony took place at Bujuni Primary School in Buyanja Constituency, Kibaale district in Bunyoro Sub-Region and was attended by 2nd Deputy Prime Minister and Minister for East African Affairs, Al Hajji Kirunda Kivejinja and a number of Cabinet Ministers, among others.

President Museveni said that the National Resistance Movement (NRM) Government has always promoted unity among Ugandans so that the country can develop. He noted that there is a lot of tribalism at play when it comes to choosing leaders and who can settle in the Bunyoro Sub-Region. He added that the land wrangles in the area started with the coming of the colonialists who divided people according to tribes and rewarded those tribes that cooperated with them with land from other places in the country.

Mr. Museveni said his government has tried to unite Ugandans to put an end to the disunity caused by the whites and strongly cautioned politicians and media houses against promoting tribalism. He called on them to unite their platforms with a view to promoting the unity of Ugandans in order to enshrine in wananchi the necessity of togetherness in developing their country. He also cautioned wananchi against choosing their leaders along tribal lines but rather focus on competence.

Lands, Housing and Urban Development Minister, Hon. Betty Amongi, revealed that one of the tasks of her Ministry is to address historical injustices to do with land. She said the new Lands Office in Kibaale is a very important milestone as it will not only issue land titles but also deal with land surveying and mapping, among others.
She advised theose who got back their land titles to use their land to and improve their lives economically.

The Chairman of the Uganda Land Commission, Mr. Baguma Isoke, that disclosed that the Commission has so far purchased 200,000 acres of land at Shs.92 billion and secured 504 titles.