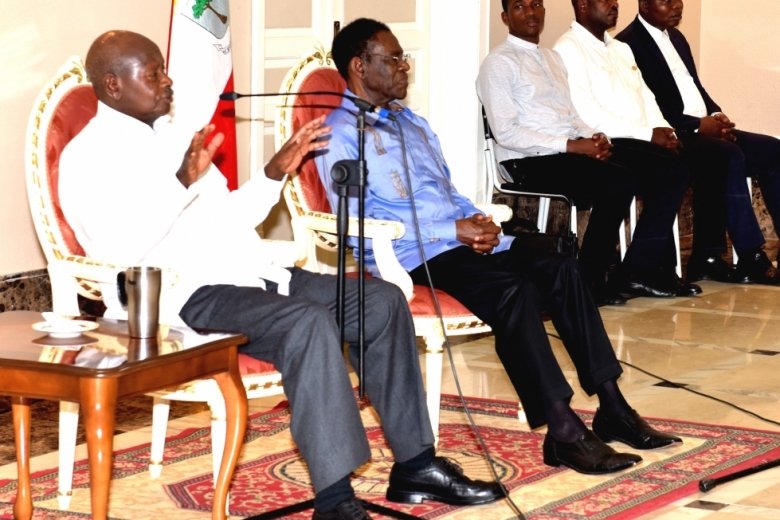 The President was speaking during a joint Press Conference with his host President Teodore Obiang Nguema Mbasogo at Mongomo Hotel at the end of his four-day state visit to the Republic of Equatorial Guinea.

“I congratulate President Obiang Nguema on the right decision of not wasting gas by flaring it. He took a decision that it is madness to destroy part of your natural resource. All the gas must be used by liquidifying for sell or for electricity,” the President said.

President Museveni thanked his host for arranging a working tour for his delegation that saw him visit various oil and gas projects, maritime ports, recreational parks and the infrastructure development in the new city of the future in Djibloho. He also hailed the people of Equatorial Guinea for conserving their natural forests that he described as gold mines that attract high value tourism. He described the country as the cradle of bantuism saying West Africa is where Bantu go for African pilgrim of heritage and language.

President Obiang Nguema Mbasogo said Museveni is the first Uganda President to visit his country and that despite not going to many places, he dedicated three days to Equatorial Guinea.

President Obiang Nguema said the quality of the person of President Museveni is a rare and yet great quality for the continent and humanity.

He said, it will be the first time that Equatorial Guinea will be sharing experiences with Uganda in the areas of oil and gas saying while there are many pitfalls, it is important to learn and agree with exploration companies to avoid selling cheaply.

On how he has managed to turn what is described as the oil curse into a blessing for his people, President Obiang Nguema said the ugly term, ‘curse’ is only used by exploiters and that oil is black gold and cannot be referred to as a curse.

“Like Honey, Oil and gas attracts all and sundry. Petroleum or black gold is never going to be a curse. How can a curse bring so much transformation and development to a nation. Only those seeking to have the wealth for themselves wish that it is a curse for others,” he said.

President Obiang Nguema Mbasogo said Equatorial Guinea’s development level is a huge blessing, emerging from one of the least developed countries on the continent to the third, whose development is unprecedented.

Initially, the two leaders witnessed the signing of a memorandum of understanding between the two countries  in which the two countries agreed that both will be participating in hydrocarbon Events, starting with the upcoming 3rd Uganda International Oil and Gas Conference scheduled for end of September 2017.

They also committed to sharing knowledge and experience in the field of oil and gas. President Museveni also pledged to appoint an Ambassador to Equatorial Guinea to strengthen cooperation.