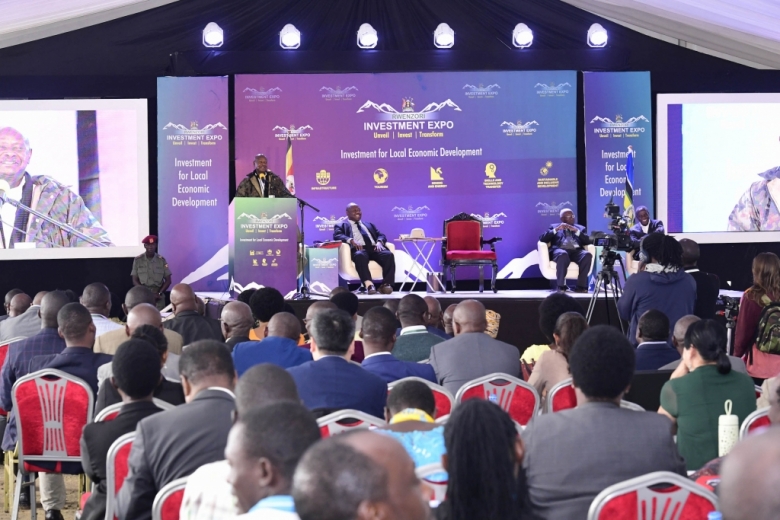 President Yoweri Museveni has commended the people of Kabarole District in particular and Rwenzori Sub-Region at large for embarking on income generating activities in order to banish poverty and create prosperity.

“I am happy to be here and witness that you are waking up and started the task of generating income. I am impressed with the value addition I have seen that covers agro-products. Commercial agriculture will go a long way towards generating income. However, we must diversify and stop depending on one sector. Industries should be used for diversification,” he said.

The President was  speaking at Rwenzori University in Fort Portal Municipality during the launching of the 2-day Agri-led Expo 2020 under the Operation Wealth Creation, led by Gen. Salim Saleh.

The event is running under the theme ‘Investment for Local Economic Development and its major venture is to promote agro-industrialization for national development.

During the occasion, the President also witnessed the signing of 5 memoranda of Understanding that include one between the Mountains of the Moon University and Belgium for the establishment of a 5-star hotel that includes a hotel training institute within the Campus. The others were between the Uganda Development Corporation and Mango Tree, a Chinese company for establishing water transport on Lake Albert.  UDC also signed others with Mabaale Tea Factory, Mpanga Tea Factory together with the East Africa Cocoa & Commodities Ltd that is under the Bundibugyo District Local Government.

Mr. Museveni observed that wananchi can benefit more since banana fibres can be processed into papers. He said that they have made the initial step into linking agriculture with industries. He revealed that the Government of Uganda has got the target of social transformation, diversification of the economy with the State leading in the provision of security and infrastructure. He commended Gen. Saleh for the work done within the Operation Wealth Creation project as he pledged to support all the exhibitors with working capital. He assured the members present that Uganda is going to have an industrial revolution. He, therefore, commended the people of Tooro for the increased banana production that has eased food needs in Kampala.

The Minister of Defence, Adolf Mwesige welcomed President Museveni to the Rwenzori Sub-Region.

The Vice Chancellor of Mountains of the Moon University, Prof. John Kasenene, saluted the President for his input to transform his institution into a public university. He reported that the institution has 47 programmes with a bias to science subjects.