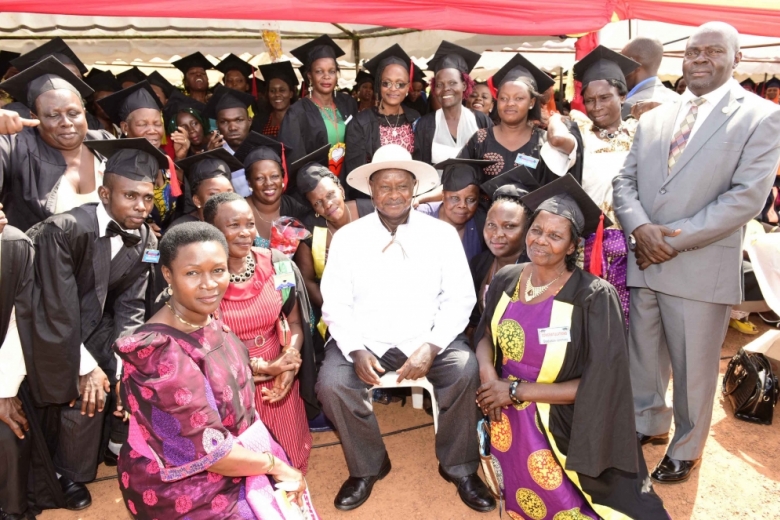 President Yoweri Museveni has highly commended Wakiso Woman Member of Parliament and State Minister for Primary Education, Hon. Rosemary Sseninde for supplementing the government’s ‘Skilling Uganda Programme’ through training of her constituents in skills that will get them employment opportunities and help in the struggle to rid them of poverty.

Presiding over the graduation ceremony of over 1760 women and youth from 9 Sub-Counties of Wakiso district, who completed a three-month training in a number of skills, the President hailed Mrs. Sseninde as one of the NRM cadres who have grasped the Movement teaching on the elimination of poverty and unemployment. The ceremony took place today at Wakiso district headquarters.

The skills that were imparted to the constituents included fashion and design, saloon and hairdressing, bakery and decoration under the SSENINDE FOUNDATION. The President, who advised Ugandans to differentiate between development infrastructure and household income, noted that whereas government has and will continue to play its role in providing development infrastructure, if citizens don’t work to get rid of household poverty, the country will not develop and achieve her transformation goal.

He observed that the NRM government has, since 1995, initiated several programmes aimed at poverty eradication like the Entandikwa loan scheme, the NAADS, the Microfinance, provision of the Youth and Women Fund and the Operation Wealth Creation. However, he added, poverty still remains a big challenge to the country.

The President said that some NRM leaders have attributed the non-satisfactory progress of most of the poverty eradication programs to lack of skills and training for the population; the more reason why the Government for starting the Skilling Uganda Program. He commended Mrs. Seninde for joining the government in the effort of imparting skills to people in her constituency to enable them eradicate poverty and create employment opportunities. He called on other leaders to emulate the example of Hon. Sseninde.

He also commended her for being an honest and dependable leader who delivers government programs to the grass root level and for continuously caring and lobbying for her constituents.

Mr. Museveni congratulated the graduands upon the completion of their respective courses and asked them to use the acquired skills to generate wealth and get rid poverty in their homes. He advised the trainers to focus on training and giving skills that produce goods that are on market demand.

“Don’t get clouded in one professional area and make it circulated. Acquire skills that produce goods and services that are on high demand because the life and survival of any business is its market,” he advised.

Mrs. Sseninde, on her part, said that the SSENINDE FOUNDATION focused on providing practical skills to women and the youth that will enable them to employ themselves and generate wealth. She noted that the programme targeted all adults no matter their age, gender or education background. She said that the training attracted many people who have no formal educational background because the courses are practical. She revealed that although the programme has started in the 9 Sub-Counties of Wakiso district, her plan is to cover the entire district despite the funding challenges.