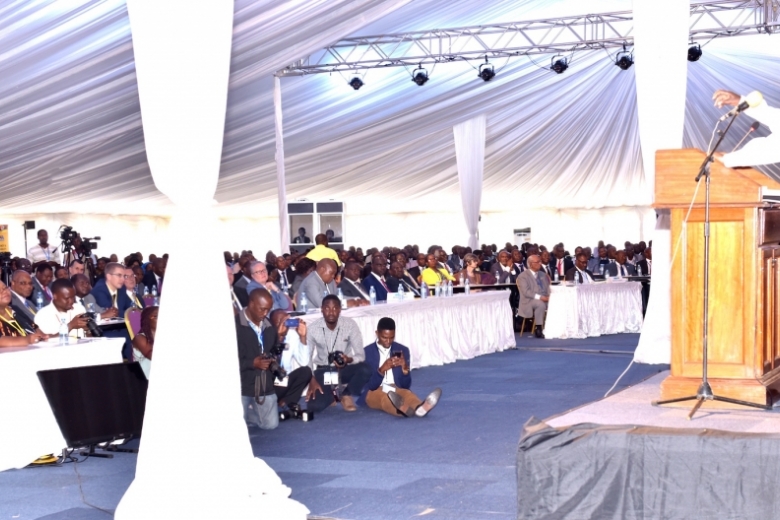 President Yoweri Museveni has challenged accountants to fight corruption. He also urged them to keep accounts properly as one of the ways to ensure that Uganda registers further growth.

“Keep accounts properly, fight corruption then your country will grow. Accountants must record correctly. If they are faithful in their profession, Uganda will move forward,” he observed.

The President made the challenge at Speke Resort Munyonyo where he opened the 4th four-day Africa Congress of Accountants that has attracted over 1,200 delegates. The Congress has been organized by the Institute of Certified Public Accountants of Uganda (ICPAU) and is running under the theme ‘Accountants and Accountability; Transforming Africa’s Economies.

President Museveni who was specifically addressing Ugandan accountants to fight corruption further observed that they are crucial people and emphasized to them that society needs to have reliable accountants.

Regarding the economic progress in Uganda under NRM Government President Museveni informed the accounting professionals that they play a key role in development and that his government has identified a number of strategic bottlenecks that affect the economy. He noted that the bottlenecks that were identified have been confronted adding that a lot of progress has been recorded in the economic sector of Uganda.

He observed that the NRM Government has been able to create jobs for wananchi and marketing of the excess products through the regional economic blocs, such as the East African Community. He told the delegates that if “we fully utilize the economic blocs now in place, nothing will prevent Africa from moving forward”.

The President informed the Congress that Africa is a very rich continent but noted that it has got the challenge of a small population. He, however, expressed optimism that since the population is growing, nothing will stop the people of Africa in general and Uganda in particular, from growing.

President Museveni disclosed that the African continent has had a problem of ideological meandering. Giving Uganda as an example, he said that the country had been meandering for the last 50 years and that at one time it was a failed state. He said that the NRM Government has placed the country on the trajectory for development.

The Minister of Finance and Economic Planning, Hon. Matia Kasaija, noted that accountants are gatekeepers of our financial resources. He revealed that accountants have saved the government billions of shillings through proper accounting practices. He, therefore, urged them to continue serving in public interest.

Former Chairperson of the African Union Commission, Nkosizana Dlamini Zuma, saluted President Museveni for the role he has played in promoting the Institute of Certified Public Accountants. She said that the African Union decided to make long-term goals through agenda 2063 focusing on achieving meaningful development.

She emphasized that education and skills are vital for Africa’s progress. She called on the African continent to prioritize the need to process within Africa the bulk of the items that the continent imports. She observed that Africa imports 98% of the processed goods that the people of Africa consume.

The President of the Institute of Certified Public Accountants of Uganda, Mr. Protazio Begumisa, revealed that the institute has been in operation in the country for 25 years. He said that the Institute has 2,400 members with 6,000 students in Uganda. He observed that to transform Uganda, there is need to increase productivity and also invest in infrastructure