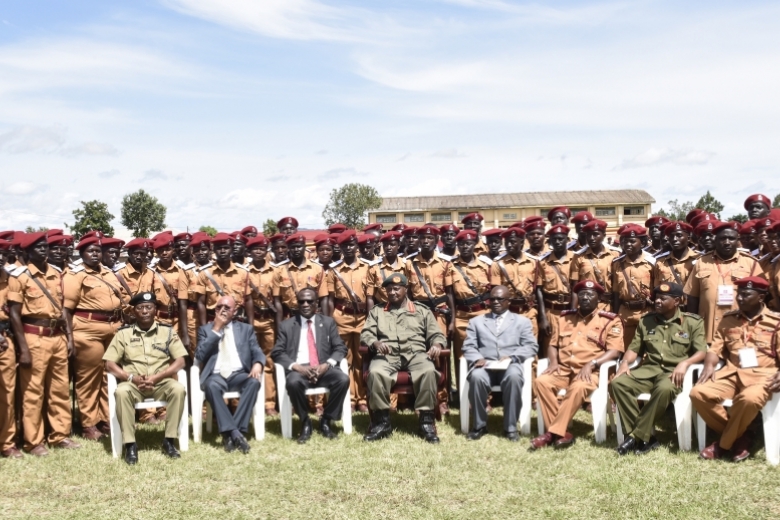 President Yoweri Museveni has called upon the judiciary to expedite trials and sentencing of prisoners.

Speaking today at the pass-out ceremony of Uganda Prisons Services (UPS) Officers at the Prisons Academy and Training School Grounds in Luzira, the President said expediting trials and the sentencing of prisoners is one way of keeping prisoners at a reduced cost.

"I am going to discuss with the judiciary. Judges should come to Luzira or Prisons and try the prisoners there. The judiciary and other systems should not worship procedure but look into other circumstances," he said.

According to the Commissioner General of Prisons, Dr. Johnson Byabashaija, the institution spends a lot of money on feeding and transporting prisoners to courts of law. Of the 51,000 prisoners in the country, 51.7% are still waiting for trial.

A total of 323 officers: 122 Command Course Officers (CCOs), 128 Cadet Principal Officers (CPOs) and 73 Cadet Assistant Superintendent of Prisons (CASPs) were passed out at the ceremony.

President Museveni gave assurances that the government would avail the Uganda Prisons’ Services (UPS) with the funding it requires. "The money to enhance production systems such as cotton, silk and the furniture workshop will be got this financial year. We cannot fail to fund production and fund consumption," he said.

The President reassured the country of the government's commitment to ensure security. He, therefore, called upon the population and the Police to be more vigilant.

"When I was in Masaka, I noted that there was a low level of vigilance on the part of the population and the Police yet communication systems such as phones are in place but no one has bothered to create hotlines," he said.

The President called upon the National Resistance Movement (NRM) Secretariat together with the Ministry of Gender, Labour and Social Affairs to guide the youth in order to avoid jail. 77% of the 51,000 prisoners are youth aged between 18-34 years.

"All youth in or out of prison must be guided to see how to fit into commercial agriculture, industrial, services, ICT and public service sectors," he said.

He cautioned the youth against gambling. "The youth think they can make a life through gambling and yet lotteries have one winner who will get a prize but what about the rest?" he asked.

The Minister of Internal Affairs Gen Jeje Odongo called for more government funding to the Uganda Prisons Service to become more productive and self-sufficient. It has cotton and silk plantations and also a furniture workshop.