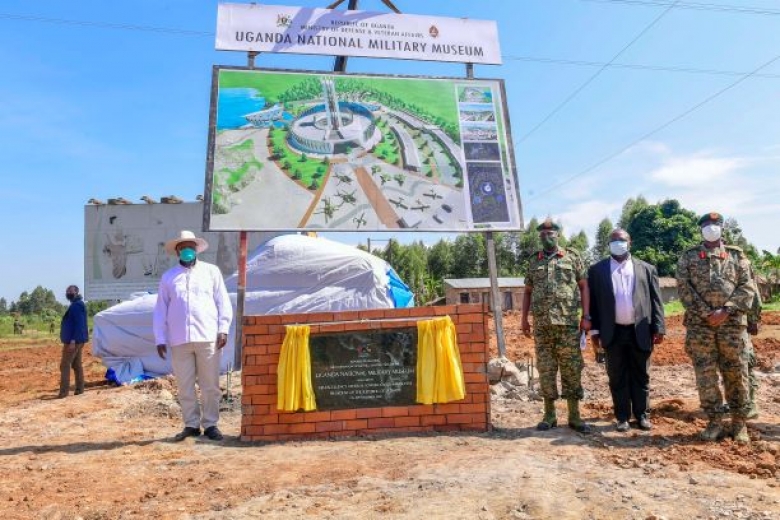 President Yoweri Kaguta Museveni who is also the commander In Chief of the UPDF has commended the Uganda People’s Defense Forces (UPDF) and the Directorate of Doctrines for the idea of constructing a Uganda National Military Museum at Katonga on the outskirts of Masaka city.

“I want to thank the UPDF and the Directorate of Doctrines for finally seeing the obvious which is the history of NRA/NRM because it is unique and special. The Museum is a good idea and Katonga a better location for its business preposition,” President Museveni said.

The President made the remarks shortly after laying a foundation stone for the construction of the Uganda National Military Museum as part of the activities to mark the 40th anniversary of Tarehesita.

This year celebrations will run under the theme; “Celebrating UPDF at 40; fruits of fulfilled partnership of maintaining and consolidating the people’s security, stability and prosperity”

The President revealed that most of the wars especially in Africa had somebody backing them like foreign backers, unlike the NRM which was supported and backed by the local people.

“Here, it is our people who backed us, so its good to capture the history of this struggle. Thank you for coming up to build this Museum,” the President Museveni said.

President Museveni said that if one follows the NRA/NRM line of caring for the people, they will not fail in leadership.

“Our line was and still is caring for the people and their needs, but now leaders have neglected the ordinary people and they are overtaxing them,” he said.

The President warned local leaders against overtaxing the ordinary people saying they should at least pay annual license but not monthly tax.

“Never take a thread or a even a needle from poor people without paying. That’s what made us succeed,” he said.

He said many Ugandans voluntarily pay taxes e.g. through buying beer for those who drink among other things.

President Museveni advised the UPDF to add portraits of the Late Muama Ghadafi, Julius Nyerere and Samora Machelle at the site for their contribution during this struggle.

Responding to the local Chairperson’s concern of Rubanda Primary School not having ownership of the land the school is seating on, President Museveni directed that a land tittle in the names of the school should be processed.

The Minister of Defense and Veteran Affairs, Hon. Adolf Mwesigye said that Ugandans have all the reasons to celebrate with the UPDF for the 40 years of securing Uganda’s future and consolidating the total peace and stability in the country.

He commended the President for building the capacity of the UPDF for the last 40 years.

“Thank you for building the capacity of our force. This is a fundamental achievement,” Minister Adolf Mwesigye said.

The Chief of Defense Forces Gen. David Muhoozi thanked the President for sparing time out of his busy campaign schedule to launch the Defense unity activities marking the 40th anniversary of Tarehe Sita.

The CDF said that as the force celebrates Tarehe Sita, they also celebrate all those who contributed to the struggle. He revealed that this year’s celebrations will take place in Greater Masaka. The commander Directorate of Doctrines Lt. Gen. Pecos Kuteesa revealed that the construction of Uganda National Military Museum at Katonga will cost 110 billion and is projected to take 4 years.

“Katonga has many memories for me, the goal of the museum is to preserve and conserve the History of Uganda Military,” Lt. Gen. Pecos Kuteesa said.

Present at the Function were high ranking Military officers, Ministers and political leaders.