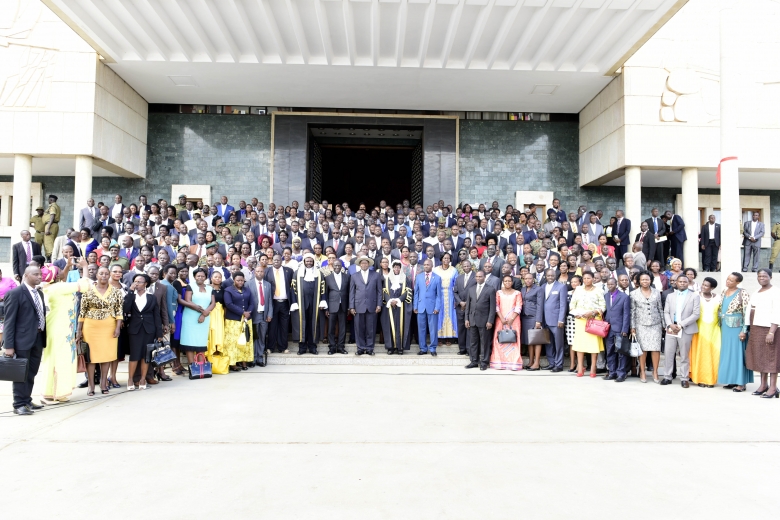 President Yoweri Museveni has commended members of the 10th Parliament for passing the test of supporting the Constitution of Uganda.“You have passed the test of supporting the Constitution of Uganda. We are on the brink of take-off. Uganda is now able to undertake its own projects while using its own funds,” he said.The President made the comments today at the Parliamentary Conference Hall in Kampala where he administered the Oath of the Parliamentary Speaker to the Parliamentary Speaker, Rt. Hon. Rebecca Alitwala Kadaga and that of the Deputy Speaker of Parliament.The 10th Parliament elected Rt. Hon. Rebecca Alitwala Kadaga as Speaker and she has effectively commenced her second 5–year term in office. Hon. Jacob Oulanyah retained the post of Deputy Speaker of Parliament after garnering 300 votes as opposed to Hon. Mohammad Nsereko’s 115 votes. There was one spoilt vote.President Museveni presented instruments of power to the Speaker, Rt. Hon. Rebecca Kadaga that included the National Constitution, Rules of Procedure of Parliament and a mace. He also handed over instruments of power to her Deputy, Hon. Jacob Oulanya.In his remarks to the August House, President Museveni observed that Uganda today has got two challenges, namely corruption and delay in decision-making in Government.  He, however, assured Parliament and Ugandans at large that the NRM Government will fight those vices. He challenged the MPs not to allow corruption enter the Parliament.Mr. Museveni President congratulated the Speaker, Rt. Hon. Rebecca Alitwala Kadaga upon her election. He observed that it was unanimous as demonstrated by the MPs. He also congratulated Hon. Jacob Oulanyah upon his election as Deputy Parliamentary Speaker. He dismissed allegations by some personalities to the effect that Hon. Oulanyah was a puppet. He noted that Hon. Oulanyah can be a bridge between the grand fathers and the grand-children in the House. He, therefore, used the same occasion to congratulate all the MPs in the 10th Parliament upon their elections and for swearing-in.Mr. Museveni advised some Movement members for not adhering to a common stand made by NRM while preparing for the elections of Speaker and Deputy Speaker of Parliament saying it was wrong for any member not to respect a lawful decision taken by the Party. He said that NRM would not tolerate that kind of conduct. He criticized the Kampala Central MP and other legislators who, he said, are fighting for their welfare without due regard to the welfare of the rest of Ugandans.President Museveni pledged to work out the building of a new Chamber of Parliament to accommodate about 500 MPs. He expressed happiness that the NRM Government has liberated the Ik community in Karamoja Sub-Region, who have for the first time, fielded a legislator in the 10th Parliament. He added that the Tepeth were also liberated from the previous situation of being swallowed up by the Matheniko.President Museveni revealed that the Government has been providing funds to Political Parties in the country. He reminded the MPs that politics is voluntary adding that politics is different from the private sector that is there for money making.The Acting Chief Justice, Justice Steven Kavuma, congratulated the Members of Parliament upon their election into the National Parliament. He saluted President Museveni and the people of Kyadondo for the trust they placed in him to serve the country.Justice Kavuma who was officiating the swearing-in ceremony on behalf of Chief Justice, Bart Katureebe, declared Rt. Hon. Rebecca Kadaga as duly elected unopposed as Speaker of the 10th Parliament of Uganda.In her acceptance speech, Speaker Rebecca Kadaga pledged to be Speaker for all Members of Parliament. She saluted President Museveni for his wise leadership. She stressed to the legislators that wananchi need accountability from them. She noted that it was her role to link the people with the National Parliament. She committed herself to be objective in conducting business in the August House.Rt. Hon Kadaga asked President Museveni to facilitate the construction of new chambers of the House slated to be erected in the northern car park in the Parliamentary grounds. She said that the new facility was expected to accommodate about 500 MPs.Deputy Speaker, Jacob Oulanyah told the House that he had learnt one lesson of humility as he served and emphasized that that virtue should be the cornerstone of operations. He congratulated the Speaker Rebecca Kadaga upon her election and pledged to provide her his total support. He prayed to God to bless President Museveni, Speaker Kadaga and the rest of the people. He reminded the House that they should fully appreciate that Parliament has got the power to ensure peace, order and management of Uganda.Rt. Hon. Oulanya appealed to MPs to work towards attaining the target of transforming Uganda into a middle-income country by 2020. He also advised the legislators to practice tolerance and mutual respect as they live to put national interests and those of the Party above self.