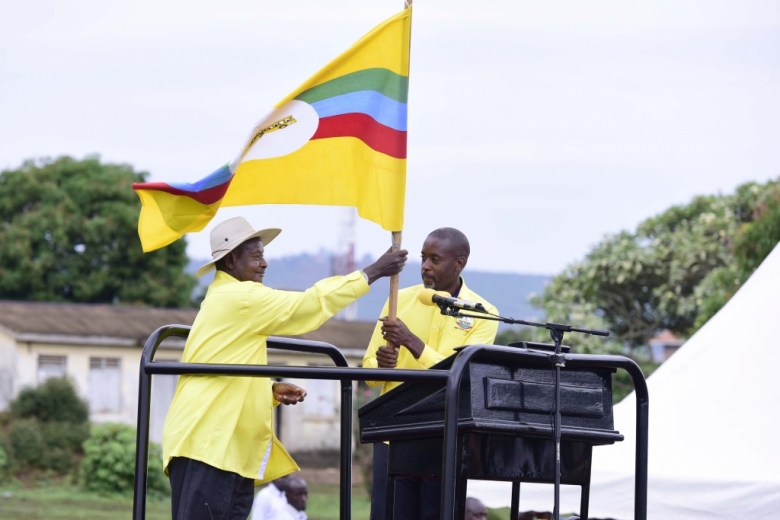 President Yoweri Museveni, who is also the National Chairman of the National Resistance Movement (NRM) has appealed to the people of Jinja Municipality East to vote and bring back to Parliament the NRM flag bearer,  Igeme Nathan Nabeta in the bye-election slated for Thursday 15th March 2018.

The NRM Chairman told the voters at Kilembe village in Walukuba Division, Jinja East Constituency in Jinja Municipality that it was not wise for the electorate to vote opposition Members of Parliament in a multiparty dispensation because opposition MPS spend all their time criticising the government instead of partnering up with government to develop their areas and also following up on their constituencies’ development programs.

Mr. Museveni said that the opposition MPs are a disservice to the country and their own electorate because they never follow up on their areas’ development agenda.

“You should know the power that lies in your electoral mandate and stop playing with it. You should know who protects your interest and not just look at small things like hand-outs,” he added.

The President further observed that “We have put a lot of money to support the youth, women and the business community but it’s being swindled because of lack of monitoring that is supposed to be done by the leaders you elect.”

The NRM Chairman said that the Movement’s development programme focuses on guaranteeing peace and stability, development of infrastructure, wealth and job creation but noted that this can easily be achieved when the Movement commands unquestionable majority in the Legislative Assembly.

On wealth and job creation, President Museveni said that Ugandans must engage in commercial profit oriented agriculture, focus on promoting industrialisation, and promote the service and the ICT sectors.

He warned those reported to be using intimidation and beating others to cause political submission that they will pay a heavy price because it can’t be tolerated.

“Uganda is a free country where citizens should be at freedom to elect people of their choice and those seeking leadership positions must use convincing methods to win the people but not intimidation,” he said.