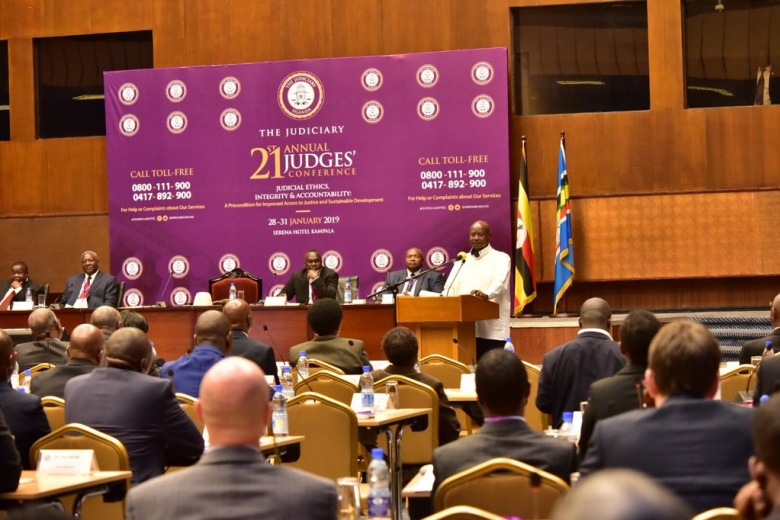 Officially opened the 21st Annual Judges Conference this morning at the Serena Conference Centre in Kampala. The conference is running under the theme, "Judicial Ethics, Integrity and Accountability: A precondition for Improved Access to Justice and Sustainable Development".

It is important for judicial officers to understand the historical mission of the state and work towards supporting it. The state unlike the country or nation, refers to organised authority over a country. You can therefore have a country (geographical space) minus a state.

These armies were indisciplined. In Tanzania, they mutined asking for more pay, and Mwalimu Nyerere rightfully disbanded them. In Uganda they arrested Minister Felix Onama, forcing him to increase their salary and get promotions. Shortly after, they overthrew the post-colonial politicians, commencing a regime of slaughter and bloodshed.

It is for that reason that some of us immediately opposed Idi Amin. He took power on January 25th 1971, and two days later, on 27th, I had left the country to go and prepare to fight him. He had not even begun killing people, but he was the dredge of the neo-colonial system.

We have since built a professional army, and got Uganda back on the path of progress. With an annual budget of $439m, our army has not only secured Uganda but we now support some peace efforts in the region. Our ideology and historical mission lies on two things; Patriotism and Pan-Africanism.

It is important therefore for the institution to understand this historical mission. A few times we have had skirmishes with the Judiciary, for example on the question of bail for capital offenders. Must it be compulsory? Why don't you have the same anger for these criminals like I do?

On the question of remuneration, my views are clear. We shall share what is available but a bigger fraction goes to those who need it most. It was a philosophy we built in the Bush. Our little food would go to those on duty, not the senior most officer. I would lie hungry in my tent but while the soldier on duty had what to eat.

Why, for example, should an undersecretary in a ministry, whom we can replace in a day, earn more than a pilot or doctor who we spend years training? Pilots elsewhere earn a lot of money yet we were underpaying our instructors at Soroti Flying School, placing it at risk of closure.

Gradually, as our revenue increases, so shall the remuneration of government workers. It will be scientists first, then we create a matrix for other professions. For example I understand the judicial officers cannot do any other work, this makes them a critical group.

This approach is tied to staffing. With limited resources, we cannot have all the staff we need. If for example we followed the UN recommendations for our police, we would need 80,000 police personnel but we have 43,000. My view is that we have fewer but better facilitated workers, instead of just talking numbers minus quality.