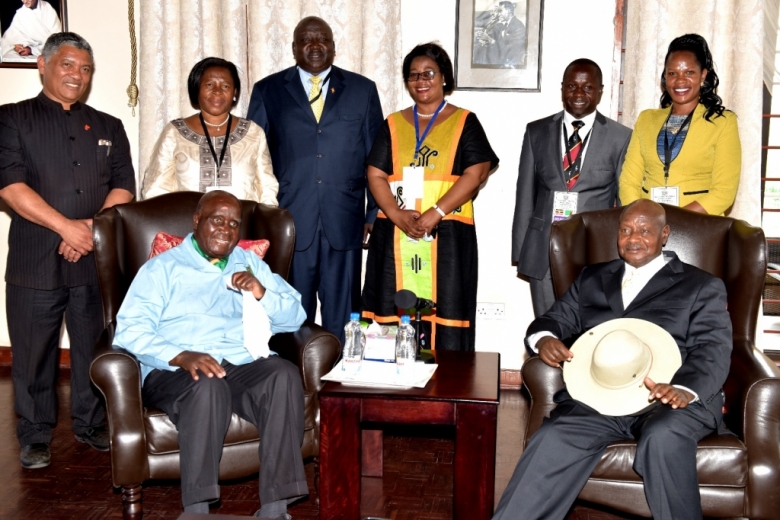 President Yoweri Museveni has expressed great admiration for 92 year-old Kenneth Kaunda, the founding father of Zambia telling his guests and journalists, “You are in the presence of a great man. If Mwalimu Nyerere and this man had not stood firm, history would be very different today. What you call history is our current affairs,” President Museveni said shortly after arriving at the 40 acre State Lodge facility where the retired former president stays with his family.

President Kaunda who despite his age insisted on welcoming President Museveni to his home and even presented him with a bouquet said he was delighted to host Museveni in his home. Museveni immediately held his hand and walked him slowly back to th house.

“He is my father. I’m a great follower of these old men. I’m their disciple,” Museveni said before the two leaders had a warm conversation about Kaunda’s retirement and the country’s independence.

President Museveni asked his host if he rears any animals; goats or anything on his vast land before both leaders had a hearty laugh.

He consoled the former freedom fighter on the death of his wife Betty Kaunda and took time off to pay his respects at her grave nearby.

On his return, he had a piece of grass that he had plucked along the way as he returned to the house and asked Mzee Kaunda if he knew what the grass was for. The two leaders talked cows and grass thatches like father and son. Shortly after President Museveni introduced Hon. Minister of State for Foreign Affairs Okello Oryem to Kaunda as the son of Gen. Tito Lutwa Okello, immediately bringing another smile to Kaunda’s face. Museveni also told him, he is working with the son of former President Milton Obote alongside that of Gen. Tito Okello. He later invited Mzee Kaunda to come to Uganda just to rest and relax.

“I want these people to know that African people fought for their freedom. By I963 when the Organisation of African Union was started in Addis Ababa, Zambia had not attained its independence. When Zambia got independence, Mwalimu and Mzee here spearheaded the fight in the south. Zambia suffered because the routes for goods were closed forcing them to use the hell run routes from Tanzania,” Museveni said.

Earlier in the morning, President Museveni now in Zambia on a two day state visit paid his respects to the country’s founding fathers and leaders, laying wreaths at the Freedom Statue in Lusaka in a colourful ceremony marking Zambia’s 52 Independence anniversary.

The President later joined the nationa at State House for the National celebrations.