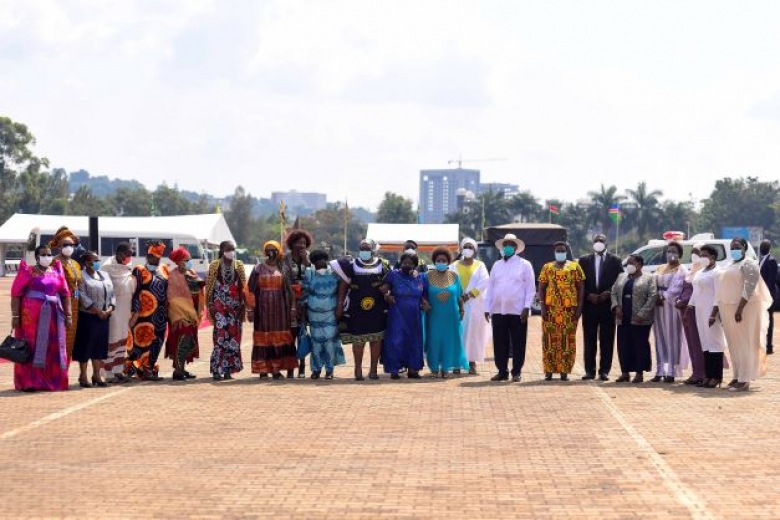 President Yoweri Museveni has called on all African leaders to unite for development and economic empowerment of the people.

“What we need to address as Pan Africanist is the issue of prosperity through production. We should also solve the issue of market because without the market, you will not get rich,” he said, adding that countries in the world that answered the question of prosperity are very rich.

The President was speaking at a ceremony to mark the 59th Anniversary of the Pan African Women at Kololo Ceremonial Grounds in Kampala.

President Museveni noted that the other areas that should be addressed by African leaders are strategic security and fraternity of the people of Africa.

On the issue of strategic security, the President noted that there is need to silence the guns and that this can only be done by African countries working together.

“Here we managed to defeat Amin because we worked with Mzee Julius Nyerere of Tanzania and some of the liberation movements were able to fight and defeated the whites because they fought together,” he said.

On African unity, the President said that the African people need to unite and work together because Africans are not only interconnected or linked together, but they are also similar.

“Africans are one people who are either similar or linked linguistically. Africans have four linguistic linkages that can rally the unification—the Niger-Congo speakers, the Nile-Saharan speakers, the Afro-Asiatic speakers and the Southern Africa Khoisan speakers,” he said, urging leaders to embrace the fraternity advantage as a magic chord to string on the African integration.

He appreciated the role played by the pioneers of the Pan African Organization in elevating the lives of African Women. He said the organization was not a welfare association but a political, social as well as ideological unit to contribute to the liberation of Africa from colonialism.

He pledged all the support to the organization in fostering the needs of the people of Africa.

The Vice President, H.E Jessica Alupo, saluted the President for his role in fighting for the rights of women and what they have achieved under his guidance in Uganda. She said that these women inspire young girls and later empower them to become leaders. She said that the main focus should be on financial inclusion of Africa.

Ms. Eunice Lipinge, the President of the Pan African Women organization (PAWO), appreciated the President for his role in uplifting women citing the recent appointments of the Uganda’ vice President and Prime Minister among other political appointment.

She hailed the President for personally attending the celebrations which she said is an indicator that he values women and their contribution to development. She noted that the organization strongly recognizes the roles of women in society especially during the covid 19 pandemic where they have been at centre of everything.

PAWO presented an award to President Museveni and the First lady Maama Janet Museveni for their role in fighting for the rights of women in Uganda and beyond .

The function was attended by the Prime minister Rt. Hon. Robinah Nabanjja, The Minister of Gender and Social Development Betty Amongi, the Secretary General PAWO, Grace Kaboyo and the President PAWO Uganda Chapter, Hon. Cecilia Ogwal among others.