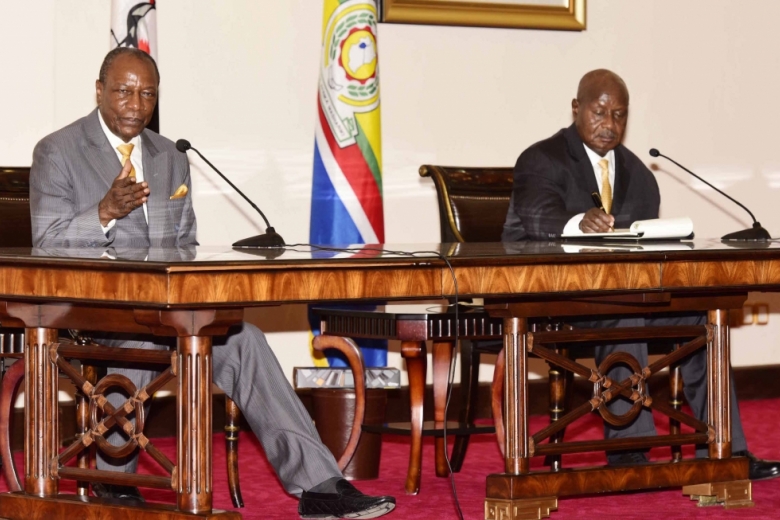 President Yoweri Museveni has commended President Alpha Conde of Guinea, and also Chairman of the African Union, for his personal efforts aimed at accelerating the implementation of strategic issues of high importance to Africa.

“We have had long talks on various issues in Africa. Also, Guinea is a valiant country, a proud African country whose politics and ideology are important. Its also a country with rich natural resources,” he said.

The President Museveni who held a bilateral meeting with his guest shortly before addressing a joint press conference urged African leaders to push for non-sectarian tendencies to avoid conflicts and confrontation in situations where there are problems.

President Condé now on a two-day State visit to Uganda is a man on a mission with a message that is galvanizing hope by Africans to reclaim the right of the continents destiny back in their hands.

He said African leaders need to speak openly and frankly so that when Africa speaks, it does so with one voice that is heard.

“We need to take charge of our own affairs. When we are united, we win. You don’t have to be super intelligence to know that the problem faced by Africa is interference in its affairs. We need to use our own resources to fund our organization (AU) ourselves. Currently our main funding is by the European Union. How can you speak freely if you are funded by someone else,” he said.

President Conde while addressing a joint Press Conference with President Yoweri Museveni said with a new dynamism in Africa, the continent will realize its vision.

President Conde said they have already established the African Renewable Energy Initiative Agency to push access to cheap energy and more recently united as a continent to support an African to the World Health Organisation. Dr. Tedros Adhanom Ghebreyesus from Ethiopia is due to assume office on July 1st, 2017.

“Our challenge is to show that we are capable of taking charge. Am here to consult President Yoweri Museveni ahead of the upcoming AU summit,” he said. President Museveni is the current chairman of the East African Community.

“We have experienced what President Museveni has done to move forward in development. My visit is to show admiration and support what he has done for Uganda. I always have admiration for Museveni, for his frankness and courage of speaking his mind even when it does not please others,” he said.

President Conde said during the summit they would discuss various issues including conflicts in Libya, DR Congo, South Sudan and Mali including the continuous occupation of UN forces in the DR Congo even when there is no progress.

“President Museveni has a great track record and can help us move forward. Museveni is focused and has the ideology. We want to use that to be able to deliver with our new vision. Our countries need to be managed for the benefit of the youth and the women. Our wealth needs to be used for the good of our peoples. We want no interference but also no impunity. We need to have our own and not be told what to do.

On the situation in Libya, President Conde said AUs goal is to stop the crisis. “It’s not easy but it has got to be done. We must find a solution. It’s like a cancer, if we don’t solve it, it will spread to the rest of Africa.

On the issue of African countries pulling out of the ICC, President Conde said it is not individual countries deciding but rather but the AU. “In ICC what do you notice, big countries who have never ratified treay are not affected. It’s only African leaders. We can’t accept that any longer. Majority voted to withdrawal but we also can’t support impunity that is why we want an African count in place,” he said.

Conde said as the AU they can no longer accept for a country to be isolated.

“Three weeks ago I was in Sudan to show support of AU to Bashir. Is it an International Criminal Court or is it a court against Africans,” he said.

On the issue of a refugee fund for the AU, Conde said the fund is not practical but rather leaders should work towards stopping causes of conflict.

“Its good to have funds in place, but isn’t it better to fight causes of conflict. Fight the causes that push people from their homes. We are against countries closing their borders. We are for solidarity in Africa,” he said.