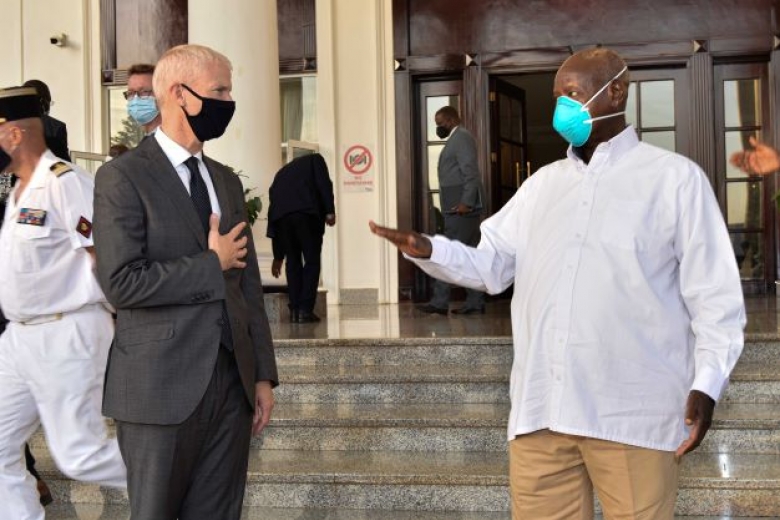 President Yoweri Museveni has welcomed President Emmanuel Macron`s decision to send a trade and investment delegation to Uganda, describing it as the correct way of boosting their bilateral cooperation.

The President yesterday received and held a meeting with the   French Minister for External Trade & Investment Mr. Frank Riester who led a delegation comprising of 12 small, medium and large scale enterprises which have expressed their interest in investing in trade, investment, construction,  ICT and health sectors in Uganda.

“I am pleased that President Macron has sent an investment delegation to Uganda. This is the correct way to go. Uganda has land, natural resources and labour. We have got capital but not too much. From Europe we need capital and entrepreneurship. Uganda has about 5,000 industries in operation. We are aiming at prosperity for our nation and prosperity means having income, jobs, producing goods and services,” he said.

“There is also a market of 200 million in East Arica and 1.4 billion people in the African continent,” he said.

Museveni said while we have all these lucrative markets, the target is to create jobs for Ugandans and creating a middle class where people would have purchasing power.

He was pleased to note that the two countries have got several sectors where they can work together in the production of goods and services including in agro-processing, infrastructure, solar and hydro- electric power production.

Mr. Frank Riester expressed his sympathy to President Museveni and Ugandans at large over the recent bomb attack in Komamboga, Kampala and said his country was ready to work with Uganda in eliminating terrorism.

He expressed their interest in building capacity with Ugandan enterprises and work towards the export of goods and services.

Minister Frank Riester said that President Macron is interested in investment collaboration with Uganda and noted, that their oil company, Total was committed to be a socio-economic partner in its oil industry.

“It is very important and good to note that the people affected by the oil project in Uganda were being taken care of by both the Uganda Government and Total,” he said.

Minister Riester congratulated President Museveni on Uganda’s decision to buy 2 Airbus planes for Uganda Airlines. He revealed that France was ready to work with Uganda in various sectors including the production of oxygen for the medical sector, treatment of cancer, agro-processing and the provision of a fiber optic project in Kampala City. He also said they are ready to work with Uganda in the fight against COVID-19 pandemic.

The meeting was attended among others by the French Ambassador to Uganda, H.E. Jules-Armand Aniambossou, the Minister of Defence Bamulangaki Ssempijja, the Minister of Health Jane Aceng, the State Minister of Foreign Affairs John Mulimba and the State Minister for Trade Harriet Ntabazi, Mr. Quentin Teisseire, the adviser in charge of Diplomatic Affairs and the Africa Roadmap and Alexis Du Boisberranger, the Junior adviser for exports and strategic partnerships and for the Africa roadmap among others.