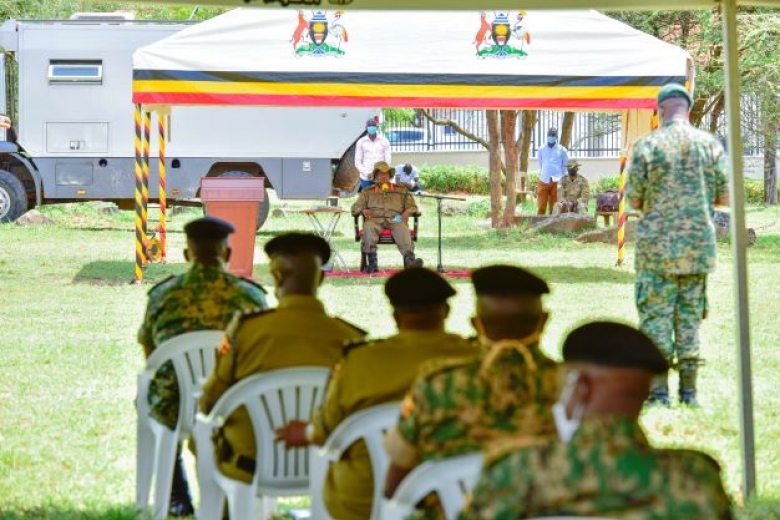 President Yoweri Museveni who is also the Commander in Chief of the Uganda Peoples defence forces has summoned the army’s top commanders over a major assault on revenge cattle raids that have left hundreds dead and thousands of cattle raided causing panic in a region that has experieced 15 years of total peace and rapid development.

According to reports, Acucu a known criminal roaming between the Jie and Turkana of Kenya was not helped by Police and the local leaders to recover his animals. He mobilised criminal gangs and attacked and raided cattle from the Dodoth resulting in counter raids by the Dodoth that has left over 400 people dead in two years.

“The Dodoth rejected peace talks with the Jie and have vowed to harm them. They just want revenge. This cycle must be broken peacefully,” the President said.

The President was today speaking to commanders of top security organs including the UPDF, SFC, Police, ISO and the Anti stock theft police in a meeting at Morulinga State Lodge in Napak District.

Following the revenge attacks, a new set of thugs exploited the situation and formed alliances using mobile phones across clans raiding kraals and selling the animals to buy guns and set up road blocks to rob people.

“Don’t beat or tortue them, interrogate and avoid impatience. Acucu organised the first raids that resulted in counter raids. I now direct that a legal or a patient political actor be identified to investigate how this injustice started. In addition to military intervention, we must help them heal. Military alone will bring suppression but not peace. Peace is in peoples hearts,” the President said.

He said for government to be accepted among tribes, it must revenge the wrong.

“What we have now is privatised revenge, modern governments revenge for victims. That is when people can sit back and trust government like they have done for the last 15 years. It is easy to isolate the wrong doers. This calls for discipline and high skills in military science,” he said.

President Museveni cited cattle as a major point of conflict and called for cattle management including using chips inserted in the animals to trace movement and registration.

He cautioned security agencys to be firm with fairness and use patetient intelligence to expose the bankrapcy.

The President said justice in traditional societies in Karamoja is very senstive and if not meticulously followed, clans will come for you.

He singled out three wrongs including; 1. Okushyaza (Commit unfairness to somebody, 2. Okukyumura (Commit a wrong against somebody but short of murder), 3. Enzigu – Vandetta which must inevitably follow murder of a clan member.

‘Treat them firmly but with fairness. The one who steals someones cow must pay. It needs patient intelligence not arrogancy of colonial and neo-colonial actors,” he said.

The meeting discussed various strategys that will be tabled at the high command before implementation.