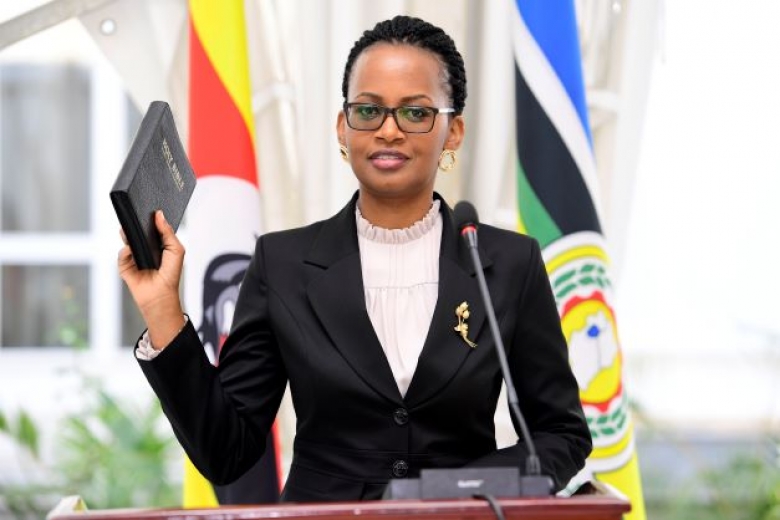 President Yoweri Museveni has said the National Resistance Movement concept of justice is original from the grassroots with emphasis that the people came from the villages and defeated an army that was in the barracks.  He further emphasized that the historical justice of the National Resistance Movement has been largely a pro-people concept that is linked with the African tribal way which never compromised on justice and appealed to the judiciary in the country never in any situation ever relent or compromise when administering justice to Ugandans.

The President made the remarks at state house Entebbe where he presided over the swearing in ceremony of sixteen newly appointed judges of the high court as well as the new head of the commercial court and the head of the High court.

President Museveni told the judicial officers that the right to justice for Ugandans should not be compromised at all times and added that there should be full accountability for all offenders especially the capital offenders if the judicial system in the country is to serve its purpose and be of use to the people.

“The rights of our people are supreme and can never be compromised and full accountability must be there, especially the capital offenders,” he said.

“The concept of bail for capital offenders was causing us problems because the security forces and the population were getting agitated as courts were releasing well known and seasoned capital offenders” he added.

The President said that because of some actions of the judicial officers some members of the public had started taking the law in their hands through mob justice and sometimes the security forces were forced to re-arrest known capital offended that have been granted bail by courts that brought about conflicts between the two government organs and portrayed Uganda as a country that does not respect the rule of law.

He said that the National Resistance Movement has a history of promoting justice right from the bush days that is why the 2 NRA fighters who killed civilians during the bush war were tried and faced public execution.

Mr. Museveni said that because of his belief in justice he has for the 36 years he has been in power refused sign a single Status of the Force Agreement where armies operating in Uganda would be tried in their home of origin if they committed crimes in Uganda because ”justice should not been done but also seen to be done”

On the need to enhance the budget of the judiciary, the President said that although its justifiable, Ugandans must know that the NRM inherited a failed state with no revenue but as the economy got better the funding of the judiciary like any other arms of government was enhanced and will continue to be enhanced.

He welcomed the new interventions by the judiciary to reduce the case backlog through arbitration, mediation and pre-bargain.

The Deputy Chief Justice Richard Butera said that the judiciary appreciates the President and the government for their commitment to ensure that Ugandans access justice. He called for increased funding to the judiciary department so as to recruit more judicial officers and reduce the case backlog in the justice department.

Justice Minister Norbert Mao commended the President for ensuring religious, regional and gender balance in his appointments. He said that as the minister of justice he will work with the rest of the cabinet to ensure that the working conditions are improved as they administer justice to the country and appealed to the new judges to ensure impartiality and fairness in delivering justice.