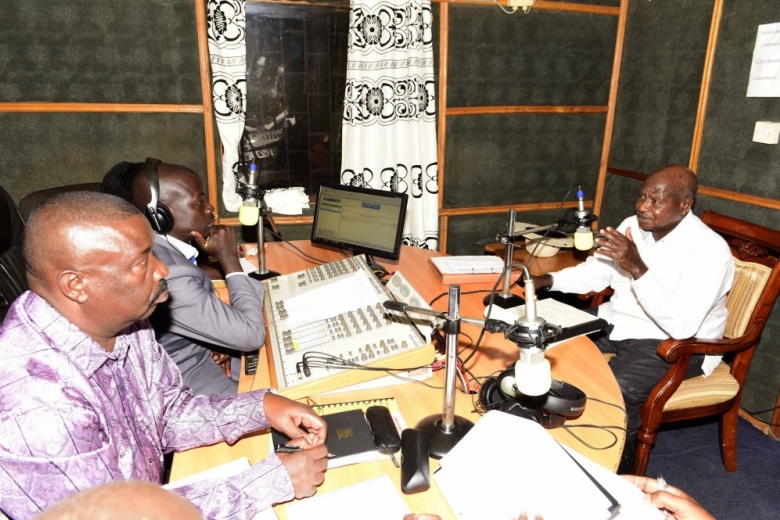 President Yoweri Kaguta Museveni has said that there are two groups of people against the proposed amendment to the land law.

President Museveni who was accompanied by the Deputy Attorney General Mwesigwa Rukutana and the Minister for Housing Chris Baryomunsi made the remarks at Spice FM radio station in Hoima municipality where he was addressing the nation on land matters.

“There are two people in this fight against the amendment to the land law. These are thieves and those that are against the development of the country and want to stall government work,” he said.

He assured the listeners that the National Resistance Movement (NRM) government’s take on land is known as it was the first government to allow people to own land and will not therefore turn around and say land belongs to the government.

He explained that with the proposed amendment to the land law, government must acquire land after compensating the owner and where a landowner is discontented, he or she can appeal in order to get fair compensation but at the same time ensuring that public infrastructure projects are not stalled.

Citing the Kamwenge-Fort Portal road that he had earlier on commissioned President Museveni said that there are some greedy people who want to loot government stall government projects with the hope of being compensated more money.

“The Kamwenge road works got stalled when a one Kasangwa wanted a billion shillings for a quarter an acre and yet the piece of land had been valued at UGX 89 million. The contractor had to change where the road would pass.

The President said the amendment would allow discontented landowners to let government projects continue on as they appeal for fair compensation. He revealed that during the construction of the Mpigi-Kanoni-Kabulasoke-Maddu-Ssemabule–Masaka road, government acquired 21 acres of his land in Gomba; he did not refuse government to acquire the land because he knew the road would be of use to him.

President Museveni said if the Uganda is to develop, it must allow infrastructure development such as factories.

“Stop fighting factories and again saying that the youth do not have jobs. You are the same people sending the youth to work in factories abroad and yet you are refusing these factories back home,” he said.

The President said that although he has always fought for the construction of more factories so that the youth get jobs time and again he has been accused of having shares in those factories. He asked the public to welcome factories citing that small countries such as South Korea and Japan have been able to develop because of factories. “In the USA, only 2% of the population are into farming and the rest into manufacturing and factories,” he said.

He also asked people to desist fighting factories according to tribes or race saying that all Ugandans have freedom of movement and can set up factories anywhere they want as long as they acquire the land to do so.

“There are people who say that is an Indian factory but all factories in Uganda are Ugandan,” he said.

President Museveni also warned people against encroaching forest reserves and swamps saying that these had greatly contributed to the long dry spells and drought in some areas of the country. He said the country has so many water bodies and government was going to secure pumps to promote irrigation. He also asked the media to teach the public about the dangers of swamp encroachment such as desertification.

“The media should teach the people that we need that water for irrigation. We do not want our country to become a desert,” he said.

On the issue of the forthcoming Local Council elections, the President called upon Ugandans to participate in the lections and to vote for the NRM party. He asked the voters to desist from voting along tribal lines but rather according to ability.

“There are so may refugees in Bunyoro and it is good that the Banyoro welcomed them but do not vote along tribal lines like in Kenya because you will lose out a lot,” he warned.