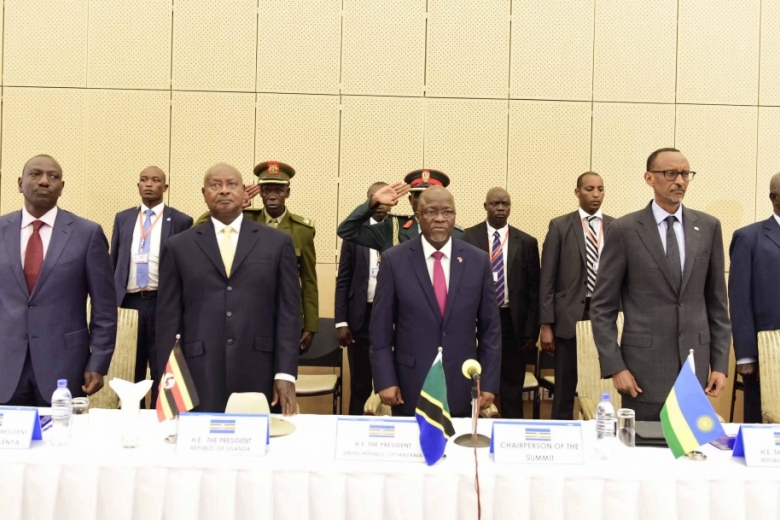 Integration of East Africa is a serious matter, one of life and death, President Museveni has said.

The President, who was making a brief address at the 17th Extraordinary East African Community (EAC Heads of State summit in Dar es Salaam, Tanzania yesterday (Friday), said East Africa is improving economically and must take advantage of its numbers to develop.

“In 1965 when studying Economics, I was told demand is desire plus ability to pay. If you only have desire but no ability to pay, it is not demand,” he said.

“In Africa we have been having few numbers and inability to pay. In the 1960s, East Africa was 40 million people. But now, it is 165 million people. The numbers have gone up and the pockets are also improving.”

Uganda in 1986, said the President, had each individual on average consume 18 litres of milk while today each Ugandan drinks 60 litres of milk although it falls below the World Health Organisation’s recommended 210 litres per person per year.

“Therefore the resource of 165 million people is an important resource. It means producers but also consumers,” said the President.

The President told the audience that China best exemplified the importance of size of market.

He added, “The difference is that China was one big market while Africa was 53 fragmented markets. Therefore, when we talk of integration, it is a matter of life and death.”

Meanwhile, the East African Community will give its final position on the EU-EAC Economic Partnership Agreement in three months’ time, the heads of state of the bloc have resolved.

The resolution was among the several adopted by the heads of state attending the 17th Extra-Ordinary summit in Dar es Salaam, Tanzania. There had been expectation that the heads of state would sign the EPA at the Tanzania summit. President Yoweri Museveni was present at the summit.

In a join communiqué issued at the closure of the summit at State House in Dar-es-Salaam and read by the EAC Secretary General, Dr Liberat Mfumukeko,  the summit requested for more time from the European Union to allow them study the agreements.

Host President John Magufuli, who spelt out some of the key issues that the region is still reviewing, also asked the EU not to impose any form of penalty on Kenya which had committed to sign the agreement with the European Union by October.

President Museveni also made a similar call, saying Kenya which will now have to wait for the region’s position in January 2017, should not be punished.

“Our EU partners, don’t panic. Don’t stampede. Give us three months. Don’t punish Kenya. In January, we shall give you a collective answer,” said President Museveni.

On the EPA, President Magufuli said the East African Community member states were asking for more time to discuss new challenges that have emerged such as the EU imposing sanctions on Burundi without consulting EAC, the exit of Britain from the European Union and the possibility of a member state getting out of the partnership in case it is found to be non-beneficial in future.

The Regional summit also received and discussed a report from the facilitator of the inter Burundi peace negotiations the former Tanzanian leader Benjamin Mkapa on the progress of the peace process in Burundi.

The summit expressed optimism on the progress made and upheld the excellent work done by the facilitator President Mkapa and the chief negotiator President Museveni.

The summit tasked the East African council of Minister to draw a budget needed to facilitate the inter-Burundi peace negotiation team and appealed to international community to support the community with the necessary resources to facilitate the peace process.

President John Pombe Magufuli of Tanzania who is also the Chairman of the East African Community congratulated the republic of Sudan upon joining the community. He however expressed sadness that fresh fighting had erupted in the youngest country and appealed to all Southern Sudanese to work in the interest of their county and bring about peace and stability there. ENDS