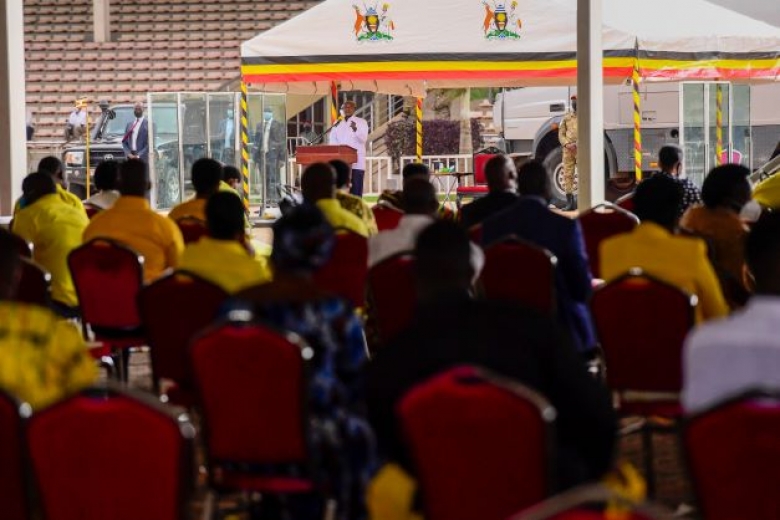 President Yoweri Kaguta Museveni has appealed to members of the 11th Parliament to support government’s decision to put more money in the Parish development model to fast track economic transformation at the grass root.

The President appealed to the NRM Caucus to support his proposal for government to put Shs 100 million per Parish per year in the Parish Development Model Fund.

The President was addressing the 4th Parliamentary Caucus meeting that convened at Kololo Independence Grounds in Kampala.

“Am here again to address you on the issues of social, economic transformation of Ugandans. We can give them the money in their Savings and Credit Cooperative Organisations ( SACCOs) and we just monitor and supervise them. I appeal to you all to support the Parish Development model. All kinds of people are there in the Parish including the women, youth, disabled and old people,” the President.

The Parish Development Model (PDM) initiated by President Yoweri Museveni, is a strategy for organizing and delivering public and private sector interventions for wealth creation and employment generation at the parish level as the lowest economic planning unit.

President Museveni explained that the model starts with organizing the recipients themselves to make SACCOs where government puts money and they also. He said under this model, the people are the ones who decide for themselves and not their leaders in government

“They are the ones who buy the inputs themselves and decisions are taken  by themselves” he said.

Mr. Museveni emphasized that the stakeholders through a revolving fund should receive the funds

The President emphasized that the Parish Model unlike Emyooga, is mainly for agriculture.

On land fragmentation, the President advised the population to divide shares (Emigabo) from the land and not divide the land itself in case the owner passes on.

“In 1995 when so many problems had happened because of the land fragmentation, I proposed a 4 acre model. One acre for coffee, second acre for fruits, third acre for food crops and fourth for pasture for the animals,” he said.

Museveni said that the National Resistance Movement government even put this in the 1996 manifesto but leaders did not help their people.

“We started many programs like Entandikwa at the sub-county, we put money there and it was embezzled. We also started the Youth Fund, NAADS, Micro-finance, OWC, and Emyooga which we introduced recently at the constituency level,” he said.

The President who showed members some of the success stories from different people around the country revealed that the latest survey had shown a decrease in the people working only for the stomach going down from 68% to 39 %.

“Operation Wealth Creation has had an impact on this. We could actually do much better than OWC. OWC succeeded somehow because somebody was looking after a given geographical location,” he said.

The issue of value addition, according to President Museveni, will be handled at higher level, working with the private sector to guide where to put factories for value addition.

“We should advise our people to select products that are needed for the market. It should never be the government to decide but the people to decide for themselves. So please support the Parish Development model and we put more money there,” he said.

The Prime Minister Rt. Hon. Robinah Nabbanja said that government has ensured that the Parish development model system has a technical person and also involve all Parish Chiefs.

“We have put aside money to train Parish chiefs and the technical persons plus a 7 member committee headed by the local council 2 chairperson to head the Parish Model,” she said.

The Minister of Local Government Hon. Rafael Magezi said that government will focus on improving the community roads in the parish, including bridges, provision of internet connectivity etc to facilitate the effective implementation of Parish Development Model system.

The Government Chief Whip Hon. Thomas Tayebwa said that their aim is to ensure that whatever is done in Parliament is in line and connection with the NRM manifesto.

The caucus meeting was attended by the Vice President (Rtd) Maj. Jesca Alupo, Prime Minister Nabbanja, Ministers and independent NRM leaning members of Parliament among others.