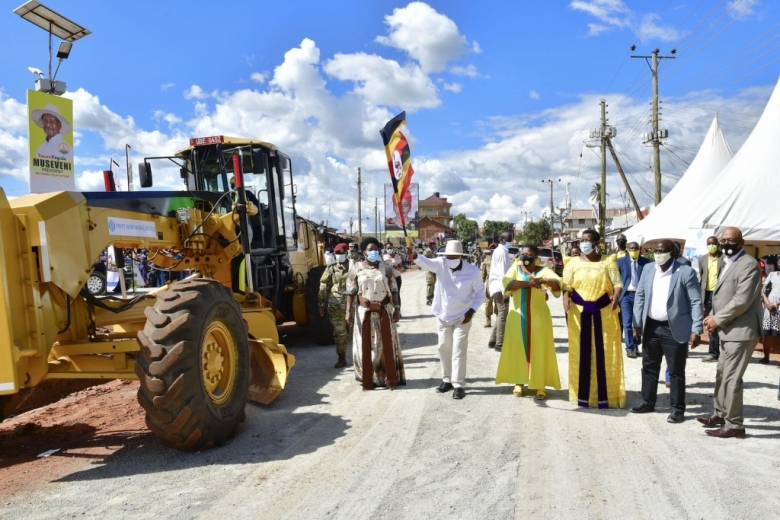 President Yoweri Museveni has said improved revenue collection has led to equal distribution of natural resources including infrastructure development like roads around the country.

“Currently, government collects about 21,000 billion shillings annually which is increasing. This will enable further infrastructure development as witnessed by the road infrastructure that has just been commissioned in Mayuge district,” he said.

On the same occasion, the President performed groundbreaking ceremonies for the construction of the Walugogo-Iganga-Bulopa-Kamuli road stretching to 57.8 Km and Saaza Road within Iganga Municipality respectively.

The President said that the NRM government has always emphasized prioritization to implement government developmental programs and ensure that they are equally distributed.

“NRM has not been sectarian in any way since its inception. That is why it has been successful in executing its national developmental plans because it handles issues by priority. NRM is an expert in arranging its priorities,” he said.

President Museveni urged the people to guard against coronavirus by wearing masks, avoiding crowding and observing Ministry of Health standard operating procedures to fight the pandemic. He observed that majority of the people were not taking precautions of avoiding the killer disease seriously.

The President called on the people of Busoga subregion to utilise the roads that the government has put in place for profit making enterprises to eradicate poverty in their households.

The Speaker of Parliament Rebecca Kadaga noted that the road network development in Busoga subregion is a great achievement for the region and said she was happy that the president commissioned construction works for more projects.

“The construction of Saaza road in Iganga Township will promote the economic status of the town dwellers by running their business stalls”, she said

The Secretary General of the NRM Justine Kasule Lumumba said there is need for the installation of traffic lights and camera surveillance systems for the people to be vigilant about security of person and property in township localities.

The Minister of Works and Transport General Katumba Wamala called upon the people of the area to further embrace the forthcoming government developmental projects by encouraging the youth to participate in them through acquiring employment opportunities to improve on their economic status.

“The commissioned road from Musita in Mayuge district connecting to Busia district on Uganda-Kenya borderline through the districts of Iganga, Namayumba, Bugiri has a regional integration benefit for the increasing population,” he said.

He warned the public against the practice of stealing and vandalizing road signs.