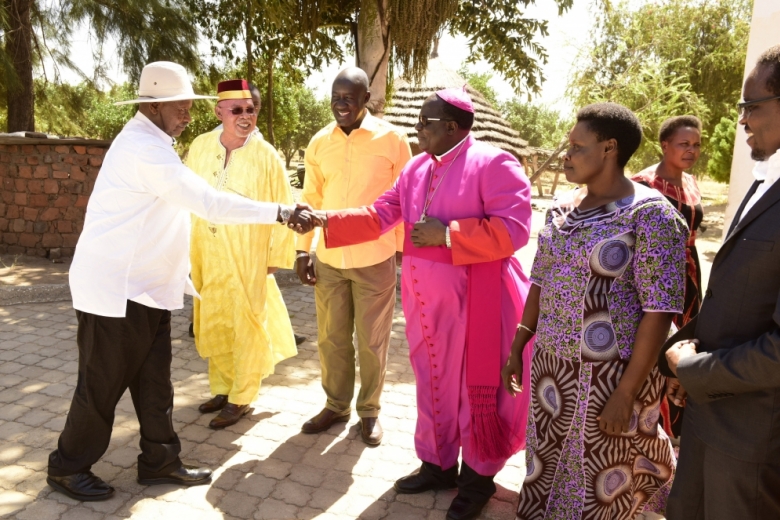 President Yoweri Museveni has called upon Ugandans not to fear to be patriotic even if it means sacrificing life.

“The message I have for Ugandans is that I have witnessed this since independence more than 50 years ago. God has mysterious and amazing ways of working through his people. When you work for people, God blesses you too. So don’t fear to work for God, your community and Uganda at large,” he said.

The President was speaking at the thanksgiving ceremony to celebrate the life of the late Epel George William, father of Hon. Jesca Alupo, former Minister of Education and Sports. The ceremony took place at Akwamor Primary School playgrounds in Aketa village, Ongongoja Sub-County, Usuk County of Katakwi District in Teso Sub-Region.

The President told the congregation at the ceremony that was also attended Deputy Speaker of Parliament, Rt. Hon. Jacob Oulanyah among other dignitaries that one cannot believe that children of the fallen freedom fighters, like the late Epel’s children and others, would be very useful to this country. He attributed their success to their parents having died while pursuing patriotic lines for the country.

“We salute all those who died for their contribution because they died while building patriotism and the spirit of their country,” he added.

He challenged the people of Greater Teso Sub-Region to work for prosperity and wealth of their families now that they have peace in their area. He commended the people of Teso for listening to Government call for growing fruits, such as grapes.

Regarding the discomfort the people have realized on account of the dry weather the President said that the government has plans to introduce micro irrigation schemes using solar powered water pumps to serve farmers that can cover reasonable areas.

“Through Operation Wealth Creation (OWC), government will also introduce dairy cows for milk production and fish farming in the area because the region has many wetlands,” he said.

He commended the people of Katakwi District for supporting NRM.

Minister for Internal Affairs, Gen. Jeje Odongo thanked the President and also commended the government for the general transformation of Teso Sub-Region especially for peace and infrastructure development.

Speaking on behalf of the family members, Hon. Jesca Alupo thanked the people for turning up in overwhelming numbers from all corners of the region and beyond to pray for the soul of her late father.

The Archbishop of Tororo Archdiocese, who is also Apostolic Administrator of Soroti Diocese, Rt. Rev. Emmanuel Obbo, reminded the people to shun hatred saying the late Epel George William lived a Godly life for he always strived to transform the people he lived with in his duties as a head teacher.

He lauded the government for the dividend of peace Teso. He appealed to the residents of the region to preserve peace, be skilled in whatever they do and also champion forgiveness.