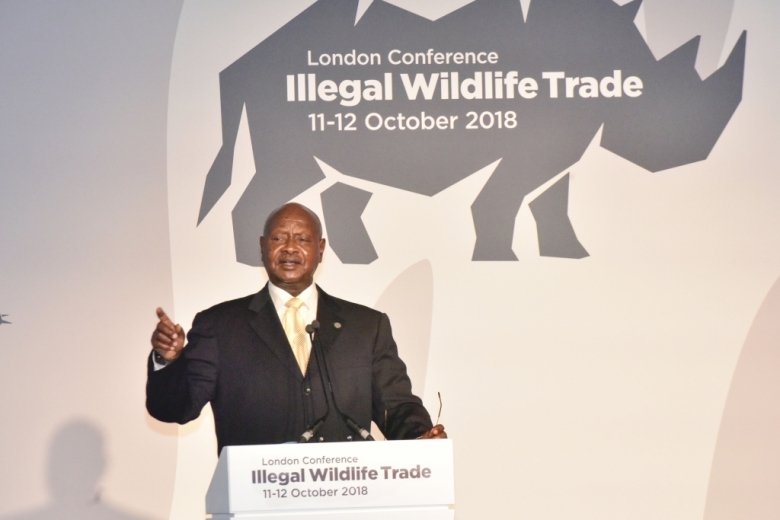 President Yoweri Museveni has said issues of illegal wildlife trade cannot be divorced from poverty and that countries must strive to get their people out of poverty through sustainable tourism, investments, trade and industrialization, adding that the structure of the society in Africa needs to change as happened in Europe.

“In Uganda, for example, 20% of the money generated from wildlife is shared with the local people neighboring protected areas to help improve their livelihoods. We must strive to get our people out of poverty through sustainable tourism, investments, trade and industrialization,” he said; adding that the structure of the society in Africa needs to change as happened in Europe.

“Following the renaissance in Europe, the European society metamorphosed from a Peasant, artisan and feudal society to a society of the middle class and skilled working class.  This was as a result of the industrialization and total monetization of the economy,” he said.

The President was speaking during the fourth Conference on illegal Wildlife Trade (IWT) which opened on Thursday at the Battersea Evolution in London, United Kingdom. The conference was also addressed by the Duke of Cambridge Prince William, President Mokgweetsi Masisi of Botswana, President Ali Bongo Ondimba of Gabon among others, among others.

“Industries and developed services encourage urbanization. This means less people in Agriculture and the rural areas so that there is less conflict between man and wildlife and less temptation to invade the forests and the wetlands,” he said. The President is accompanied by the Minister of Foreign Affairs Sam Kuteesa, that of Tourism Prof. Ephraim Kamuntu and his daughter Diana Kamuntu Museveni.

The illegal wildlife trade (IWT) has a negative impact on African economies and their development. It destroys ecosystems and biodiversity, undermines institutions, and channels scarce state resources away from critical social programmes.

The Duke of Cambridge Prince William Arthur said in his keynote speech that it makes economic sense to protect wildlife from criminal networks targeting animals in the wild.

"It's heartbreaking to think that by the time my children, George, Charlotte and Louis are in their 20s, elephants, rhinos and tigers might well be extinct in the wild," he said, adding that that he could not face his children if his generation allows elephants, tigers and other species to become extinct.

After the conference, President Yoweri Museveni and Prince William held a side meeting at Buckingham Palace.

According to the organizers, addressing IWT and promoting conservation is one aspect of protecting the tourism industry and the vital direct and indirect jobs it provides.