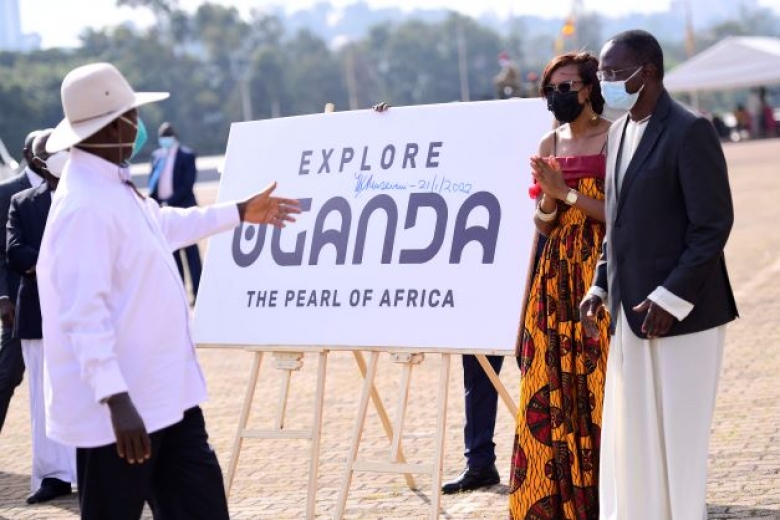 While unveiling the brand at Kololo Independence Grounds in Kampala, the President urged the Ministry of Tourism, Wildlife and Antiquities together with Uganda Tourism Board (UTB) to put more emphasis on community and cultural tourism.

The President pointed out some unique aspects that highlight Uganda's tourism potential that should be emphasized. These include; Uganda's terrain, vegetation and climate, wildlife, weather and location.

"Whenever I go abroad, things are not easy at all. You're not comfortable. You're in hotels, air conditioning. It is very hot in many places, in some very cold. But here, life is so easy and so nice," Museveni said, adding that "It's a very nice place but it needed a group to talk about it and inform the world. From what I am seeing, the Ajarova group is committed to talking about Uganda".

"So that they know that when they come here, they're safe. They're in a place where there's safety from the health point of view " Museveni said

He congratulated the Ministry of Tourism, Wildlife and Antiquities and UTB board chaired by Hon  Daudi Migereko for the initiative and pledged to support them.

The Minister of Tourism, Wildlife and Antiquities, Col. Tom Butime, said the ministry has embarked on several initiatives aimed at enhancing Uganda's competitiveness as a destination.

"As our Number One Brand Ambassador who has spoken out strongly for our country, we feel emboldened by your presence and unending support " Ajarova said.

The launch was attended by among others the Vice President, Maj. Jessica Alupo, the 2nd Deputy Prime Minister, Lt. Gen Moses Ali, Ministers and Members of Parliament (MPs).