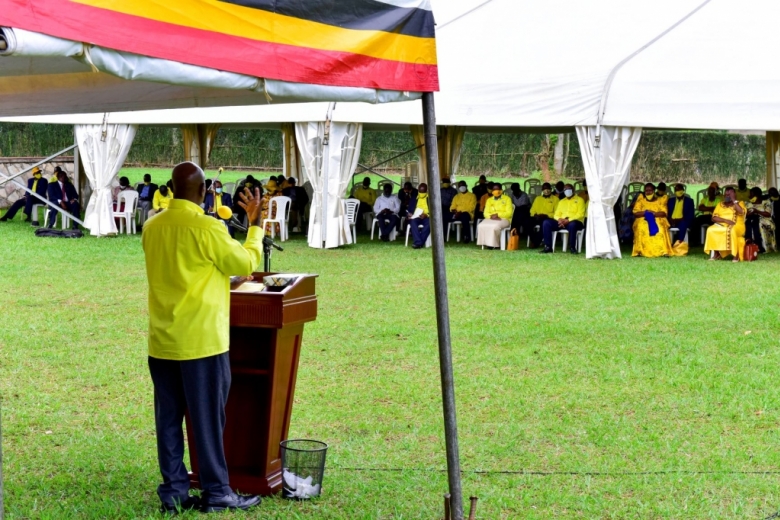 It was fanfare, dance and music as President Museveni today  kickstarted his re-election campaign trail at Kawumu Presidential Demonstration Farm in Luweero District.

As early as 7am, selected NRM leaders from the Greater Luweero Area had begun assembling at the facility, awaiting clearance, most armed with their latest Covid-19 test results, a requirement for attendance.

Keeping in consonance with Electoral Commission guidelines, the not more than 70 leaders, once inside the ground, were ushered in to music cataloguing NRM achievements while celebrating President Museveni.

Led by ministers Ephraim Kamuntu, who also chaired the NRM Manifesto Committee and the youthful Evelyn Anite, the delegates danced to songs like "Tubonga Nawe" and the recently-released "Muzeeyi Akalulu Kako" of Ronald Mayinja.

Accompanied by First Lady Janet, President Museveni entered the meeting venue at 1.30pm as the leaders cheered and ululated.

In his address, the President explained the importance of kick-starting his campaigns in Kawumu and the Luweero area, which was the heart of the Liberation Struggle that ushered in the NRM government into power in 1986.

"The history is that it is from this place that we saved Kayira's guns. He was a fighter but he didn't know how to fight. He failed to fight Gaddafi and threw the guns in Masulita and someone reported them and we saved them," said the President.

Andrew Kayiira was leader of the Uganda Freedom Movement, one of the rebel groups that had fought the Obote regime.

Continuing the narrative, President Museveni said, " The guns fell at the late Segirinya's place in Kanyanda. On March 12th, 1985, I called for two meetings at some forest here. One was for the late Rwigyema, whom  I told we were opening the western front and that they should look for an army."

He added, "I then called Hajj Kigongo and told him that I was going out to look for guns because it seemed Obote was going to fall. So at night after the briefing with my group, we shifted and stayed in Garamba and from there I started the journey to Sweden where I met my wife and children on 29th March. I was on the journey for 17 days and so this place is of significance."

The President also tasked NRM leaders to explain to the masses why the NRM party is the best political organisation to continue running the country.

He said unlike other political parties like UPC and DP that had not properly diagnosed Uganda’s, instead basing on the shaky foundation of religious and tribal sectarianism, the NRM party had instituted a correct ideology that focuses on identifying and solving the needs of the people.

“A good doctor diagnoses the patient and then prescribes the medicine for the country. A leader who cannot solve the problems of the people should just go and rear goats. You need to identify the different needs of the people and see how you will help them," said the President.

The good ideology, noted the President, had led to creation of a professional army devoid of tribal baggage, resulting into the peace and stability the country is enjoying.

Mr. Museveni reminded the audience of the NRM gains in transforming the country socially and economically, urging them to continue encouraging people to shift from subsistence to commercial farming.

“I started on this project in my home area in 1966 in Ankole and later traversed the country to preach the same message. When I saw this was taking so long, I decided to demonstrate and do what I was preaching to the people in this (Kawumu) farm," he said.

President Museveni was happy to note that despite the challenges of insufficient implements and land evictions, of the slightly over 1,000 households in Kawumu Village, 571 had shifted from subsistence to commercial farming.

Commenting on the NRM manifesto, President Museveni said the party planned to pay off absentee landlords so that it protects bibanja owners and end the menace of land evictions.

On infrastructure, the NRM chairman revealed that the Semuto-Matuga-Kapeka road was ageing and it would be re-tarmacked. He added that the Kapeka-Kitumwa-Butabangwa road was earmarked for tarmacking with a contractor already identified.

For the feeder roads, the President said the government plans to fuel the machinery already procured for districts to ensure the roads are maintained.

“I want to calculate how much fuel is need per kilometre and besides the murrum, we shall also compact them so that they are motorable," he said.

About corruption, President Museveni said Ugandans should be bold and help report the corrupt, who will be arrested by mandated agencies supported by the State House Anti-Corruption Unit led by Lt Col Edith Nakalema.

The President re-echoed the need for Ugandans to be more vigilant in face of the Covid-19 pandemic, saying it should be treated seriously because more people were dying. He encouraged them to adhere to the SOPs and practice the ‘Tonsemberara campaign’.

The NRM National Vice Chairperson, Moses Kigongo, in his brief address advised the leaders to explain to the people why the campaigns were different this time.

He urged them to maintain discipline as they go around canvassing for votes.

“Don’t abuse anyone because this will only lead to strife,” he said.

The leaders gifted President Museveni with a shield, spear abd stool, saying they were symbolic of his ability to lead and protect.

Tomorrow (Tuesday), the President will take his campaign to Lira City where he will meet party and youth leaders.