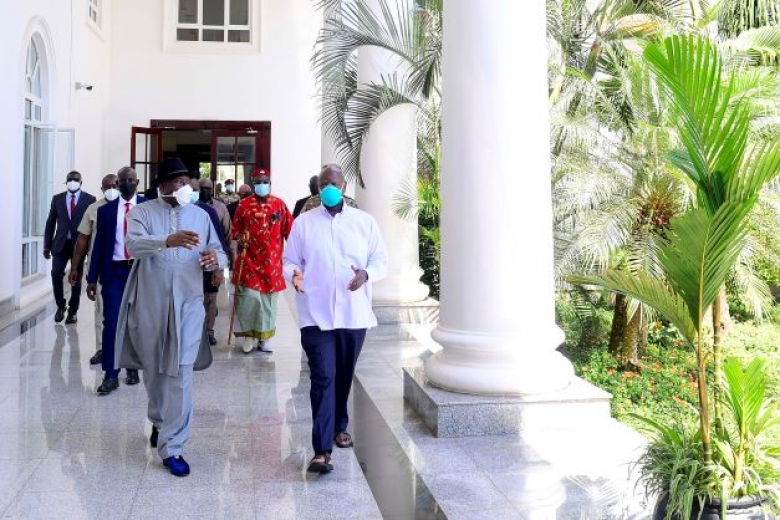 President Yoweri Museveni has today received and held a meeting with the former President of Nigeria Goodluck Ebele Azikiwe Jonathan who is in the country for a working visit.

President Museveni welcomed the former Nigerian leader to Uganda and invited him to enjoy the country’s’ great weather describing it as God given.

“The greenary you see here is because of the altitude. Here where we are (Entebbe) is 1000 metres above sea level. This is part of the reason why Churchill called it the Pearl of Africa,” he said.

Nigeria’s leader applauded President Museveni for his able leadership that has seen Uganda transformed to another level of development. He cited education among other areas that has increased in the country including Cavendish University.

The two leaders discussed other areas of mutual concern that included trade and business in the country.

President Goodluck Jonathan paid a curtesy call on the  President Museveni ahead of his installation as the chancellor of Cavendish University Uganda tomorrow 26th August 2021.

Cavendish University Uganda (CUU) is a one of the leading Private University in Uganda established in 2008 and is licensed and accredited by the Uganda National Council for Higher Education.

H.E. Goodluck Jonathan was appointed by Cavendish University in Uganda as its third Chancellor effective August 27, 2021.

H.E. Goodluck Jonathan is expected to be installed on August 26, 2021, in time to preside over the conferment of Degrees and award of Diplomas and Certificates at the University’s 10th Graduation Ceremony that will take place at Munyonyo Commonwealth Resort on the same date.