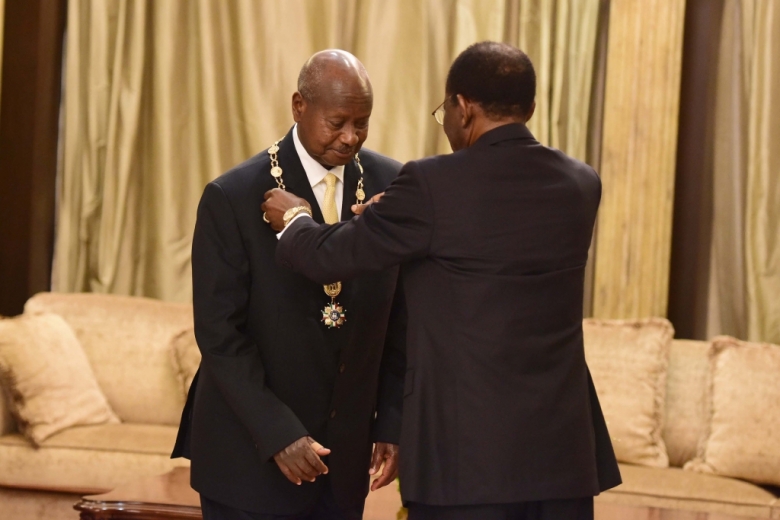 I arrived in Malabo, Equatorial Guinea for a four-day state visit on the invitation of His Excellency Obiang Nguema Mbasogo.

I thank him and the people of Equatorial Guinea for the invitation. The Bantu people of Africa originated from this part of the world, the Cameroon area.

While watching some of the cultural performers who were entertaining me, I noticed striking similarities with Ugandan performances.

The long drums, the rhythms are very similar to those of the Rwenzori Mountains. Being in Equatorial Guinea is therefore linking up with our own brothers.

Our presence in Equatorial Guinea is also to reaffirm the oneness of African people, who are either linked or similar. We should use this connectivity to build strength and prosperity.

Our only challenge now is shortage of infrastructure to link us but the easiest way to start is through air transport and telephones.

Eventually, we must solve the problem of the railway from the Indian Ocean to the centre of the continent. We can have rails from Mombasa, Dar es Salaam, Doula to the centre.

We are therefore in Equatorial Guinea for two things: looking at how to support prosperity of one another and how to push for our strategic security.

I also congratulate Equatorial Guinea for using it's oil and gas very well. When I was last here for the AU Summit, I noticed gaps between the airport and the city centre.

Today, all these gaps were gone. In their place are new, well-planned buildings. And I see the city is refurbished.

Some people say oil is a curse but in Equatorial Guinea it is a blessing.

I also thank the people of Equatorial Guinea for giving me the highest recognition and honour; the Great Collar of Independence Award. I thank you.

The people of Equatorial Guinea have presented the highest honour of their country, the Great Collar of Independence Award, to President Yoweri Museveni who is on a 4-day State visit to the Central African nation that he began yesterday at the invitation of his host President Teodoro Obiang Nguema Mbasogo.

The award was presented to President Museveni by his host, President Obiang Nguema Mbasogo, yesterday evening shortly before hosting the Ugandan Head of State and his delegation to a State Dinner at the Presidential Palace in Malabo, Equatorial Guinea’s capital city.

Acknowledging the award, the highest honour bestowed to a respectable guest and who has made an outstanding contribution to the cause of the African continent, President Museveni said he was humbled by the “unexpected award.”

Speaking later at the end of the State Dinner hosted in his honour, President Museveni praised the government of Equatorial Guinea for using well its oil resources, especially in setting up infrastructure.

“It is only a curse if you are corrupt, not focused and do not use that perishable resource strategically and correctly,” said President Museveni, who added that Uganda would copy some of the best practices since it has also discovered oil.

Equatorial Guinea, which discovered oil in 1996, is currently the third largest producer of oil in Sub-Saharan Africa, averaging 340,000 barrels a day.

Noting that the Bantu people of Africa originated from around Equatorial Guinea and Cameroon, President Museveni said his presence and that of his delegation was to reaffirm the oneness of the African people.

“The people of Africa are either similar or linked and it is crucial we use this oneness to build strength and prosperity,” he said.

“The only problem we have now is limited infrastructure to link us. The easiest way is to start with air transport and telephones. But eventually, we must then solve the problem of the railway from the Indian Ocean to the centre of the continent.”

He said a railway from the port cities of Mombasa, Dar-es-Salaam or Doula to the heartland of the continent, would greatly advance this cause.

According to President Museveni, his visit to Equatorial Guinea, therefore, was hinged on two targets; looking at how to support prosperity of each other but also focus on the question of strategic security.

Africa in the past, said President Museveni, had issues of independence and democracy. However, with independence of South Africa in 1994, those hurdles were cleared and now focus was on prosperity and security.

On his part, President Obiang Nguema Mbasogo thanked his guest for honouring his invitation, saying the two countries were steadily growing their bilateral and multi-lateral ties catalyzed by shared political similarities.

“At a political level, we believe in defence and sovereignty of our nations. We also believe in Pan-Africanism for self-determination and reliance,” he said, adding that the countries also shared economic and technological ties.

It is these similarities that had encouraged the two countries to sign cultural, science and technological agreements to create a stable welfare for both of them, said President Obiang.

The Equatorial Guinea leader visited Uganda in April this year and the two countries signed bilateral agreements to cover the fields of cultural, technological and foreign affairs cooperation.

President Museveni’s four-day visit will see him tour the Port of Malabo, the Punta Europa Oil Refinery, inspect the Port of Bata, visit the Afro-American University in Djibloho and the High Institute of New Technologies there.

Later, President Mbasogo hosted a banquet in honour of President Museveni and his delegation at the people’s Palace in Malabo. It was further flavored with a variety of music and dance from Equatorial Guinea. ENDS