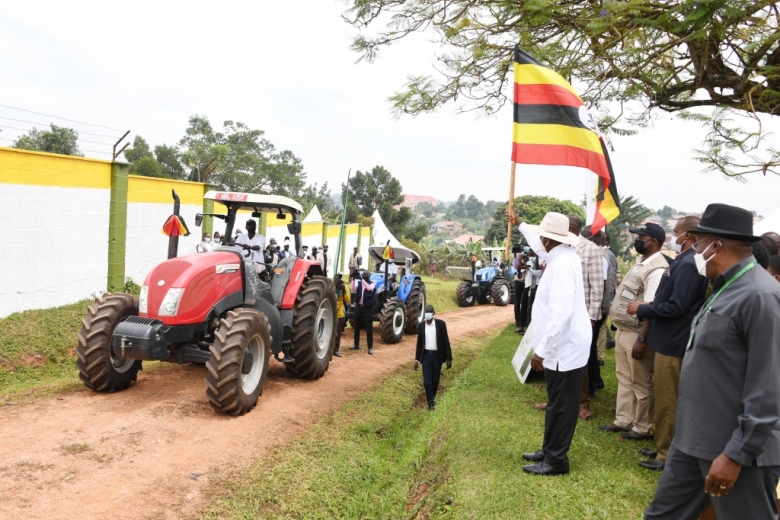 The President made the plea while commissioning the agricultural mechanization equipment at Namalere National Agricultural Referral Mechanization Centre on Thursday. At the event, Gen. Museveni handed over 150 tractors to farmer groups across the country and 100 motorcycles to Agricultural inspectors.

“When you hear and see on radio and TV that there's a war in Ukraine and that Africans are going to die of hunger, then you ask yourself what sort of people are these. Africa is 12 times the size of India. The population of the whole of Africa is now approaching that of India but with a land area 12 times. So, you ask yourself, what is wrong with these people and these people have got leaders.?

This was my problem in the 1960's, I disagreed with the leaders at that time, that is why they were calling me a communist because I couldn't be part of this laziness,” he said.

“So, I'm glad to see that finally some Africans are waking up. This is the whole thing; agriculture is science and is science which was discovered by the ancient people almost 10,000 years ago when people learnt to get seeds from the bush and plant them at home because in the past, they didn't know that. And I think that's how the Banyankore learnt how to domesticate cows instead of going to hunt them from the bush. But from that time, many Africans have just been there, agriculture of 10,000 years ago. They have not moved beyond that."

Gen Museveni added that since government is at the forefront of transforming agriculture through mechanization, Ugandans should use the chance to embrace the initiative and improve agricultural productivity.

“You must be hearing that Banyankore are banana growers, if you fly over to some of those places like Bushenyi, Isingiro and Rwampara there are so many acres of bananas but you ask them how much are you producing per hectare, the Munyankore who is doing well will tell you that I'm producing 5.3 tonnes per hectare but our sister  Dr. Florence Muranga (Executive Director of the Presidential Initiative on Banana Industrial Development) who produces bananas using science will tell you that she produces 53 tonnes per hectare,” Mr. Museveni disclosed.

“So, I'm glad that there's some small waking up, that's why I'm here. Now we have the tractors. Tractors are quicker, what takes a week time, is done in one hour, so what we are gaining there is speed. Four people to spend a week on one acre is disguised unemployment. Tractors also help us to ease penetration through softening the soil, gives you timely planting and pumping water for irrigation,” he added.

The President also called upon farmers to adopt good agricultural practices if they are to benefit more from the farming.

“We must all wake up. We must also plough in a proper way what we call good agri-practices. Like for instance having trenches along the contours that can capture the water and keep it there. Having spacing, using fertilizers and irrigation because that is what Dr. Muranga is doing. That is why she has gone from the Banyankore's 5.3 tonnes to 53 tonnes. Uganda now is one of the biggest producers of bananas in the whole world. I think its second to India even when we are using primitive technology. You can imagine if we follow Dr. Muranga, where shall we put these bananas?” Gen. Museveni wondered.

H.E the President also commended the Ministry of Agriculture, Animal Industry and Fisheries for taking a wise decision of assembling the tractors in Uganda, a move that saved the country over 40 percent of the total cost.

“Commissioning this machinery is one aspect of the whole effort of modernization of agriculture. What is important also is that they are not just importing tractors already built, they are assembling them here. They import them knock down, they come and assemble them here thus saving 40 percent of the total cost of a tractor.  Previously they were importing already built tractors that used to take a lot of space on the ship but because of that simple spectacle of seeing far, the Ministry of Agriculture managed to save on the cost.”

The Minister of Agriculture, Animal Industry and Fisheries, Hon. Frank Tumwebaze revealed that currently Uganda has 4782 units of tractors both private and government supplied and out of that number, about 25 percent of the tractors are in a functional state.

“Your Excellency this explains the current status of the low uptake of mechanization technologies that stands at 8 percent countrywide. This situation not withstanding however, I wish to thank Your Excellency for having accepted, guided and supported the Ministry of Agriculture since 2012 to revamp the mechanization function and to bring back government's direct involvement,” Hon. Tumwebaze said.

“To date, the Department of Agricultural Infrastructural Mechanization and Water for agricultural production has managed to complete and set up and operationalization of 5 mechanization centres in Mbale, Bungokho, Dokolo, Kiryandongo (which we are yet to complete) and Buwama with Namalere as the referral for all. More 14 are to be set up in the subsequent financial years of a five-year period in the respective zones of the country.” he added.

The Minister also noted that with President Museveni's persistent guidance to the country to produce more and more, the demand for mechanization technology has increased exponentially.

“Our strategy as the Ministry is to guide the farmers correctly on the better methods of farming depending on their land holding capacity.”

The Permanent Secretary, Ministry of Agriculture, Maj Gen. David Kasura Kyomukama also lauded the President for his continued guidance in promoting the development and commercialization of the agricultural sector as a pillar for middle income achievement for all the 68 percent of smallholder farmers in Uganda.

“Our vision Your Excellency is to have a competitive, profitable and sustainable agricultural sector and our mission is to commercialize agriculture. To achieve this, we intend to transform this agricultural system through promotion and adoption of appropriate and affordable mechanization technology shifting from traditional rain fed to irrigated agriculture,” Gen. Kasura said.

The event was attended by Ministers, Members of Parliament, agricultural stakeholders among others.