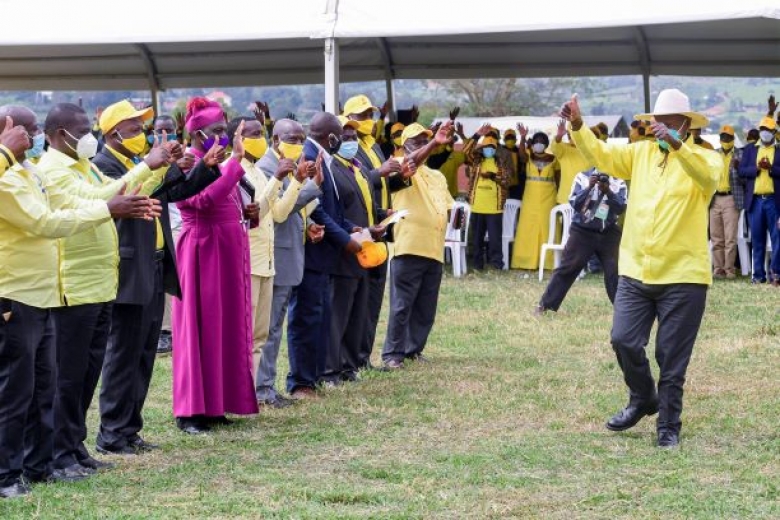 President Yoweri Kaguta Museveni who is also the NRM Presidential flag-bearer in the forthcoming General elections has urged leaders to always show people what to do by leading the way.

“We want a leader who shows what to do for the people by being exemplary,” he said.

He asked all leaders to desist from acts of corruption. He particularly told LC 5 chairpersons and their councilors to reject any thing to do with corruption.

Candidate Museveni was addressing delegates at a campaign meeting at Kyamate in Ntungamo district. Those at the meeting included ministers, members of parliament, NRM flag bearers and delegates from the 2 districts of Ntungamo and Rwampara.

Museveni told the delegates about the long journey of rescuing Uganda from the bad leadership pointing out that it was politics of identity that derailed the development of not only Uganda but also Africa. He added that the trend was changed by a young students group that has made Uganda what it is today.

He urged leaders to encourage their people to get involved in the money economy through modern commercial and calculated agriculture.

He said all is being done to have East Africa and Africa integrated for purposes of a bigger market for our products that will lead to sustainable prosperity of our people.

The people of Ntungamo and Rwampara districts highly commended the NRM government under the leadership of President Museveni for the development programs in their districts especially the good road network now in place.

“The people of Ntungamo thank you Your Excellency for granting Ntungamo a district status, they also commend you for the good roads of Ntungamo-Mirama hills, Kagamba-Ishaka and Ntungamo-Rukungiri roads that are all tarmacked,” Mrs. Museveni said.

This was contained in a memorandum read by the First Lady who is also the NRM Chairperson of Ntungamo district Mrs. Janet Museveni and Mr. Mutima Gordon Kappa the district NRM Chairman Rwampara at a meeting with the NRM Presidential flag bearer at Kyamate Secondary school in Ntungamo district.

They assured Candidate Museveni of their solid support in the forthcoming general elections.

The NRM chairman Rwampara district Mr. Mutima Gordon Kappa said the people of his district are very happy for the peace and development the NRM government has brought to Uganda in general and Rwampara in particular.

They thanked him for elevating Rwampara to a district status and will therefore give their full support to the party in the elections.

The NRM Vice Chairman Western Region Hon. Chris Baryomunsi thanked President Museveni for the scientific mode of conducting campaigns noting that this drastically reduces the spread of the pandemic.

Hon. Baryomunsi also noted that Uganda has since the advent of the NRM government developed in all sectors.

“The President has sown love in the people and he will equally reap what he has sown,” Hon. Baryomunsi said.