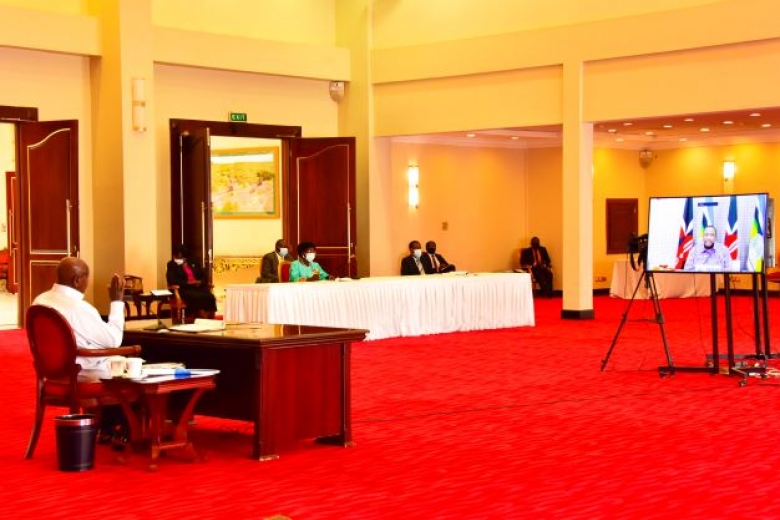 East African Heads of State have today officially admitted the Democratic Republic of Congo (DRC) into the East African Community effectively making it the latest and largest member of the trading block.

During the EAC Heads of State 19th Extra-Ordinary Summit held virtually, the summit considered the report of the Council of Ministers on the negotiations between the East African Community (EAC) and the Democratic Republic of the Congo (DRC) on admission of DRC into the EAC.

President Uhuru Kenyatta said DRC was first assessed by a council of the EAC ministers who concluded that the DRC is eligible to join the EAC, adding, that the aim of regional integration blocks is to strengthen our relationship, expand our markets for goods and services, create wealth, create more opportunities for investment and services across without hindrance, and for easy movement of goods and services in the EAC.

“Today, EAC heads of state by show of hands adopted the agenda and unanimously seconded the program of integrating DRC in the EAC region,” he said.

President Yoweri Museveni described the joining of EAC by DRC as a big event of great significance.

“I have been involved in these efforts for almost 60 years and this is really very pleasant that DRC has finally reconnected formally. What we call the DRC now was part of the Great Lakes. We were connected before colonialism. But when colonialisms came we got disconnected. It's good we are assembling. In 1960 towards the end, even Zambia and Somalia had applied to join the community,” Museveni said.

Museveni said DRC’s coming is very crucial and that ‘it is good it has happened when I am alive’.

“This means this part of the world is connected coast to coast. For people looking for prosperity, this is a good contribution. Prosperity means we produce and sell. The more buyers you have, the better. On behalf of the people of Uganda, I welcome H.E Tshisekedi and DRC in joining us,” he said.

The President said they now need to work on the issue of peace in Eastern DRC.

“That area has been disturbed for a long time by different groups. If we work together, that problem can be resolved. I thank President Uhuru for chairing the summit and thank everybody for supporting the reassembling of the African people,” he said.

President Museveni urged all the Heads of State of the EAC to work on the issue of peace collectively.

The President of Tanzania Samia Suluhu Hassan welcomed DRC to the EAC and urged the new entrant to take advantage of a broader market for goods and services, security, peace and trade.

He welcomed DRC on board and said they are now convinced that the integration agenda will be achieved and promised to contribute to peace, stability and development of the EAC.

South Sudan also welcomed the DRC to the community and said they look forward to consolidating peace and security.

congratulated DRC and revealed that they are looking forward to consolidating peace in South Sudan and he promised to continue working with the EAC.

“The Republic of South Sudan openly welcomes the DRC into the region! The admission of DRC strengthens the bloc!” Hon. Barnaba Marial said.

The First Deputy Prime Minister of Uganda and Minister for East African Community Affairs Rt. Hon. Rebecca Kadaga said the Democratic Republic of Congo will be expected to sign the deed of Accession to the Treaty with H.E Uhuru Muigai Kenyatta, Chair of the Summit by the I4th April 2022. Thereafter the DRC will handle internal processes leading to deposit of instruments of Ratification.

Dr. Peter Mutuku Mathuki the Secretary General of EAC on behalf of other Heads of State of EAC first consoled H.E Yoweri Kaguta Museveni, and Uganda for the demise of a national speaker Rt Hon.Jacob Oulanya.

He read the meeting resolutions and thanked the Excellencies for their profound support to the integration process.

Trade in Eastern Africa is set for a boost after officially welcoming the Democratic Republic of Congo (DRC), into the East Africa Community (EAC).

The DRC is the largest and most populous country to join the EAC, bringing a market of 90 million people and immediately upgrading the region’s GDP from $193 billion to $240 billion, according to reports.