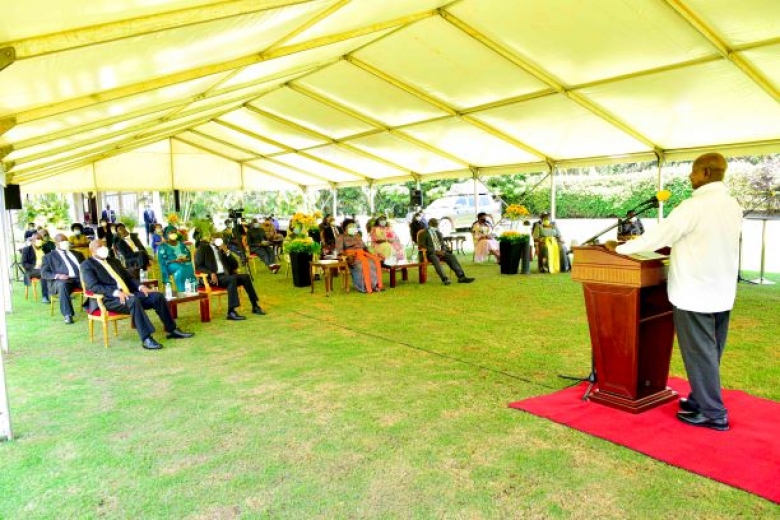 Anyone planning violence should know that the government has the capacity to counter and defeat them, President Museveni has said.  Speaking  at State House Entebbe as the country marked the 35th NRM/A Liberation Day, President Museveni congratulated Ugandans for holding peaceful elections.  However, he had a terse warning to those contemplating mischief.  “I appeal to those thinking of violence to stop because it will not work. Your are wasting your time. Don’t entertain any ideas about violence and intimidation," he said.  President Museveni was announced winner of the January 14th presidential election with 58% of the vote, with Robert Kyagulanyi of the NUP party coming second with 34% of the vote.  Following a call by the day's preacher, Msgnr Charles Kasibante, President Museveni said he had no problem talking to and working with his political opponents.  “Idi Amin’s son is a director of intelligence, Tito Okello's son is my minister. Obote's daughter-in-law is also a minister in our government. We don’t have any problem but we won't tolerate violence,” said the President.

Speaking about the victory of the National Resistance Movement (NRM) in 1986, President Museveni said it was not only a military (NRA) one but a success of ideas they represented. President Museveni said the NRM/A victory came after a long period of struggle.  “It all started in 1965 when we formed a student movement separate from the three old parties; DP, UPC, KY, which were built on the foundation of sectarianism," said the President. "DP was for Catholics, UPC for Protestants and KY for Baganda." President Museveni said they sensed the danger these three political parties posed with their ideology of focusing on identity.   The first problem, Mr. Museveni said, was that no political party would form a Government because they couldn't mobilise a national majority.

“We said no to this approach. Why would you look at people’s identity when they have similar problems and interests? Initially, people were laughing at us that we didn't know what we were talking about, that we were not realistic," said the President.   Many countries in Africa, the President said, have been affected by the problem of ideological bankruptcy based on identity, citing Sudan, Somalia, Central Africa Republic, among others.  “NRM from the beginning has been talking about the four principles of Patriotism, Pan-Africanism, Social Economic Transformation and Democracy," said Museveni.

He added, "Because of that, Ugandans have now woken up a little. That's how we have a lot of milk, bananas, sugar, etc. In this term, one of the issues is to intensify the East African integration to solve the issue of markets."  Msgnr Kasibante, who represented the Archbishop of Kampala, prayed peace and reconciliation.   “As Ugandans we only need to reconcile with one another, forgive all those with divergent views. I call upon all to seek peace and persue it," he said.