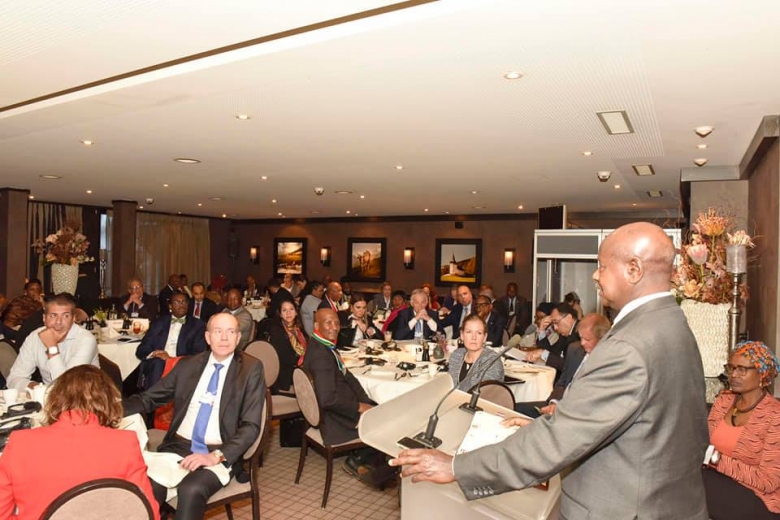 President Yoweri Museveni has said a universal dimension approach should not be used to shape Africa’s future adding that such a concept may have worked in the 1950s when the universal emphasis was on education which helped countries such as South Korea to develop and transform, but added that many other countries did not succeed.

“Lets take the example of artificial intelligence where electronics replace the brain. The brain commands the centre of the body but must also take control of the body. Artificial intelligence alone without infrastructure development such as railway, electricity etc cannot be useful. Congo alone has a lot of electronic goods but if they cant produce goods or services how can that help,” he said.

The President was today speaking during a breakfast roundtable organized by the Africa Strategy Group comprising of politicians, academicians, business people etc, under the theme “Shaping Africa’s agenda in the Global Context” held at the Hotel Grischa Monta in Davos, Switzerland at the sidelines of the World Economic Forum. The roundtable was moderated by the Executive Director of OXFAM Winnie Byanyima who said governments should be accountable to their people, prioritise public services, and economic sectors, new technologies and tax systems that bring the maximum benefit to society as a whole.

The President acknowledged that Africa is rising partly because of governments not being hostile to the private sector.

“Part of our lagging behind was the attitude governments had against the private sector, now that has changed. The people excited about artificial intelligence are those who already have developed infrastructure and a developed human resource,” he said.

The President said the continent also needs to deal with the issue of economic and political integration for credible bargaining units in addition to an educated human resource.