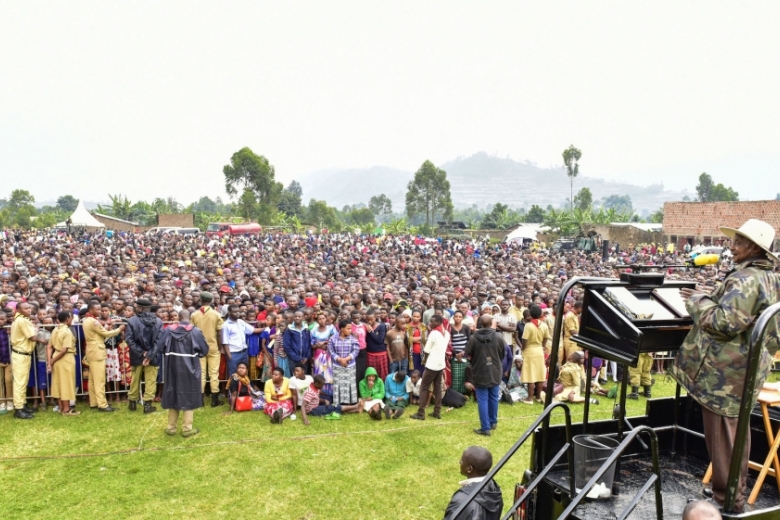 President Yoweri Museveni has urged the people in the hilly areas of Kigezi Sub-Region in South Western Uganda, who are engaged in subsistence farming on small land holdings, to shift and utilize their pieces of land to profitable modern agriculture practices to enhance their wealth and average health status.

"The mediicine for poverty is wealth creation. And the cause for poverty is lack of sensitisation to the people by their leaders. For you people of Kisoro and Kabale on small acreage of land, I encourage you to grow Irish potatoes as compared to sorghum. From sorghum one can only fetch Shs.3 million while Irish potatoes can earn a farmer Shs. 43 million shillings per year per acre an acre of land,” he said.

He also encouraged the residents in the Sub-Region to embrace poultry, fish farming as well as zero grazing of dairy cows.

The President, who is currently in Western Uganda to sensitize wananchi on wealth and job creation campaign in order to expel poverty from their homesteads, was addressing a rally  at Gisorora Primary School grounds, Gahinga village of Nyakabande Sub-County in Kisoro District.

The President assured the people of Kisoro District that he will find time off his busy schedule to visit the area to celebrate with the people of Burora Sub-County who overwhelmingly voted for NRM in the 2016 elections defeating all the Sub-Counties in the entire Kigezi Sub-Region.

Mr. Museveni expressed happiness that the mortality rate among children has drastically reduced noting poverty was partly to blame for high child mortality. He added that NRM was able to stem the high rate of child mortality rate because the government had launched a mass national immunization against the common killer diseases, like polio.

He informed the people that comparatively Sweden’s child mortality rate is so low per year because the Swedes had critically addressed wealth and health matters at national level.

On issues of trade, the President discouraged the importation of leather products like footwear, car seat covers, among others, saying that Uganda has the necessary raw materials to manufacture those products which would also be a source of employment especially for the youth if those products are made within the country.

The President welcomed the idea of establishing the John Kale Karekyezi University in Kisoro District in memory of the late Kalekyezi’s enormous contribution in the fight for Africa’s independence.

He warned wananchi against the culture of property inheritance that is characterised by land fragmentation saying that family members should be encouraged to establish family companies through formation of shares to and dividends in order to accumulate better financial profits from consolidated property.

“Human settlement should be addressed as a crucial factor to stop land fragmentation,” he advised.

Presidency Minister, Hon. Esther Mbayo, thanked the people of Kisoro District for supporting the NRM government overwhelmingly and for turning up in big numbers to receive the President. She attributed their support to the government’s building so far of the infrastructure in the area.

Kisoro District LC5 Chairman, Abel Bizimana asked Government to extend feeder roads’ network to help develop further the tourism sector in the area. He also called for the expansion of Kisoro Airfield to enable bigger aeroplanes land there because more tourists are flocking into the area.