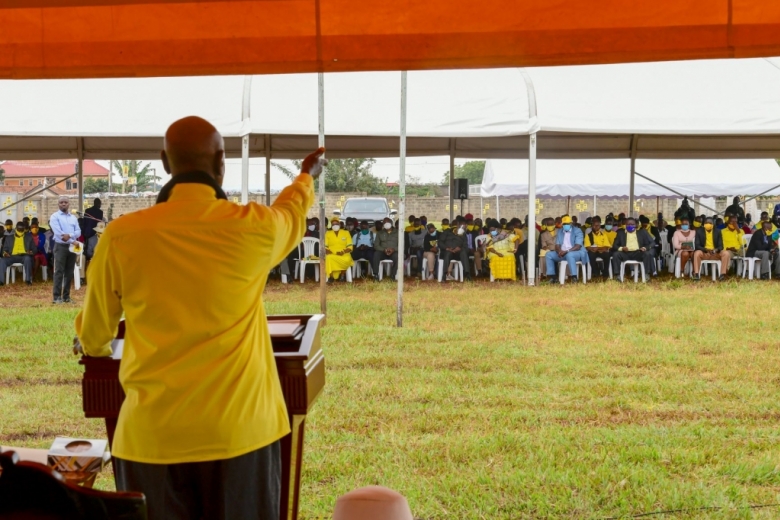 President Yoweri Museveni has urged the youth to be disciplined ideologically, spiritually, morally and educationally  if they are to be useful to themselves and the country.

“When we talk a bout the youth these days, they talk about biology or age. That is very dangerous. We need the youth that are disciplined and ideological,” he asserted.

Mr. Museveni who said he was a very active youth and brought up many youth in his house said if the youth don’t uphold those qualities they will be a failed youth generation who will not go far and may be a problem to their families and to the country.

He informed the youth that at the time of independence most of the leaders were all young and were not prepared to run the affairs of the country on the basis of taking care of the needs and interest of the people.

“The leaders of those days were emphasizing on identity along tribal and religious lines and looking down on women,” he said, adding that “this trend caused them to fail, plunging the country into chaos. Such mistakes must not be repeated. I don’t want that to happen again especially to the NRM youth. You should not fall into that group,” he said.

President Museveni explained to the youth the history of Africa and the reasons why the continent lagged behind for a long time.

He said for ideology NRM insisted on 4 principals that include Patriotism, Pan Africanism, Socio-economic transformation and Democracy, which he encouraged the NRM youth to internalize and explain to the people.

The President also emphasized the need for the youth to think broadly and understand the benefits of having an integrated East Africa and Africa adding that it is good for our prosperity in terms of trade.

“Your future lies in Uganda, East Africa and Africa for prosperity,” he stressed.

Commenting on the current scientific campaign, Candidate Museveni welcomed the idea of the youth fully participating in the mobilization exercise together with the already existing NRM structures in the villages. He urged them to engage those of opposition and ask them what they are opposing.

“If it is corruption yes, we are also totally against corruption, it can be worked on but now what are they opposing? There is no opposition in Uganda that I cannot defeat because they have no logic. When in Luwero fighting we could approach the UPCs and ask them what they were fighting for. I would engage them with our ideology and they would change immediately to support our cause,” he said.

The President told the youth leaders that the opposition has no track record to show nationally and locally of their good deeds and had already discredited itself in the region by insisting that people stay in the mountains and later disaster struck where many wanainchi died in the mudslides.

On the youth taking over ideological NRM heritage, President Museveni welcomed the idea adding that they too during their youth days took up the heritage of the late Mwalimu Julius Nyerere.

Commenting on, Emiyoga’ funds the President explained that this is a direct transfer of money to the already existing groups and government has already disbursed shs.560 million for each constituency.

“This is your Bank you have to ensure that it grows,” he advised.

On innovation parks, he said a park will be established in all zones including Bugisu. He said in Luwero, a leather tanning factory is being built and will help the youth in the making shoes.

He also opened a skills training centre within the park for training employees.