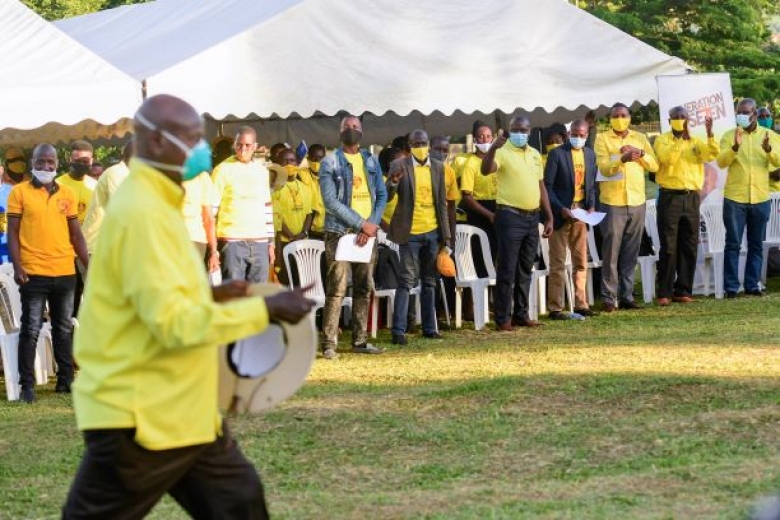 The people of Greater Masaka have lauded President Museveni for the achievements registered by the NRM government in their region and have vowed to vote for the NRM Presidential flag bearer as well as all NRM flag bearers in the forthcoming elections for progress and modernity in Uganda.

The message was contained in a memorandum read by the Minister of Agriculture Animal Industry and Fisheries (MAAIF) Hon. Vincent Sempijja at a meeting between President Museveni and the NRM leaders and flag bearers at the Liberation square in Masaka city yesterday.

The people of Greater Masaka in their memorandum commended President Museveni for the peace and security in Masaka and Uganda in general, the good road network in their districts citing the road from Villa Maria to Sembabule, from Nyendo to Bukakata, electricity, the 3 ferries now plying to Kalangala Islands, improved water coverage and above all the elevation of Masaka to a city status.

They also expressed their gratitude for the palm tree project and electricity in Kalangala adding that paraffin is now history on the Island.

“The people of Greater Masaka are very happy and praise you so much for what you and the NRM government have done. No leader has loved Uganda more than you, Your Excellency,” he said.

He pledged to ensure that the electorate in the region gives NRM the opportunity to continue serving them by electing candidate Museveni and all the NRM flag bearers in the forthcoming elections.

President Museveni who asked the gathering to observe a one minute silence in remembrance of prominent Ugandans who have of late passed away and include Dr. Kirunda Kivejinja, urged leaders of the region to interest themselves on knowing what made Uganda and Africa lag behind for a very long time.

He at this juncture told the gathering of the political history of Uganda saying it was the wrong approach by the leaders to follow the route of identity instead of identifying peoples interest and needs and finding solutions to them.

He said now that the economy has improved there is need for proper allocation of resources in Parliament starting with priority sectors like roads and the railway, the army, electricity, health services, schools, scientists and wealth funds especially for the youth and women

The Vice President and NRM flag bearer for Bukoto Central Hon. Edward Ssekandi said the people of Masaka appreciate NRM for all it has done in Masaka and urged the electorate to solidly support the party in the elections so that Masaka regains it former glory.

Hon. Ssekandi wished President Yoweri Museveni and his family together with all Ugandans a Merry Christmas and a victorious new year 2021.

Addressing the youth later at the same venue, President Museveni was happy to learn that the youth were already engaged in income generating activities and pledged to support them.

Commenting on the concern over emyooga funds as raised by the youth in their memorandum read by the chairperson of Masaka youth council Mr. Rogers Bulegeya, President Museveni advised the youth who are not involved in any of the 18 selected enterprises to join in-order to benefit.