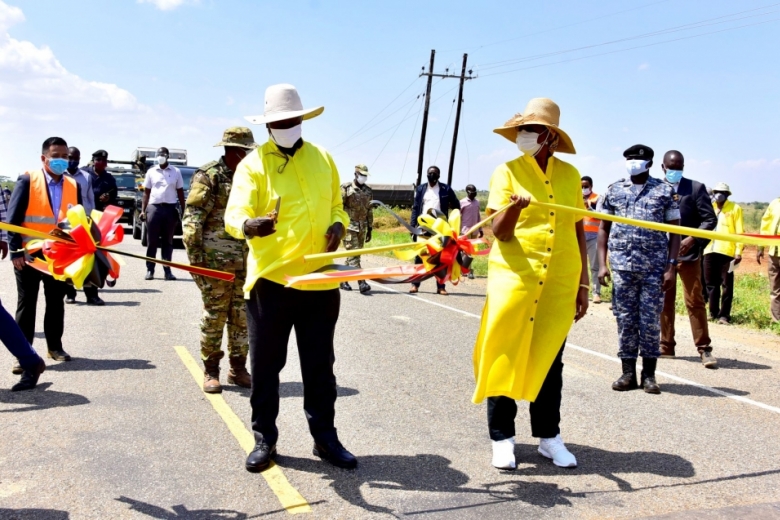 Karamoja sub-region should now brace for accerelated development since the government has delivered on four key promises, President Museveni has said.

The President, flanked by First Lady Janet, made the remarks  after commissioning the new Soroti-Akisim-Moroto road and launching phase four of the national data transmission backbone infrastructure, which brings Internet to Karamoja.

With peace, electricity, roads and the internet all in Karamoja, said President Museveni, the sub-region was now ready for take-off.

“Today in Karamoja, we have had four children at ago. This is a big achievement for Uganda but also for Karamoja. Karamoja is now connected to the whole world and the Karimojong can now place calls to the USA and other places in the world cheaply. The roads are now linking you up to Mombasa, Dar-es-Salaam etc,” he added.

With the electricity now in the region, the President said, Karamoja should prepare for an avalanche of factories, which will supplement their traditional wealth of cows and crops.

“For a long time we have been trying to bring a cement factory in Karamoja but the problem was electricity. But now you will have that factory built soon because you have electricity. Here, we have 300,000 million tonnes of limestone that will be used to make cement and there is a huge deposit of marble here. Then we have gold in Kapedo area and oil in Kadamu area," the President said.

The Karimojong, advised the President, even while continuing with their practices of animal rearing and crop growing, should do this with an eye on making money through commercial agriculture.

“The people going to work in these factories will need food. Where will they get it if you don’t grow it on large scale?" he asked.

Pointing at other opportunities like tourism, the President encouraged the Karimojong to adequately prepare so that they benefit from these ventures.

The 150.3km Soroti-Akisim-Moroto road, was upgraded from gravel to bitumen standard and the Ugandan government fully funded the Shs646 billion project. The President also broke ground for the construction of the 44km Moroto-Lokitanyara road.

Phase 4 of the National Data Transmission Backbone Infrastructure and E-Government Infrastructure was undertaken by National Information Technology Authority –Uganda with Huawei-Uganda as the contractor.

It was completed in March and connects the districts of Moroto, Napak, Katakwi, Moyo, Yumbe, Ajumani, Koboko, Maracha, Arua, Nebbi and Pakwach to the national backbone.

At the same function, Huawei-Uganda donated $120,000 (about Shs420 million) to support operations of the Ministry of Information, Communication and Technology.