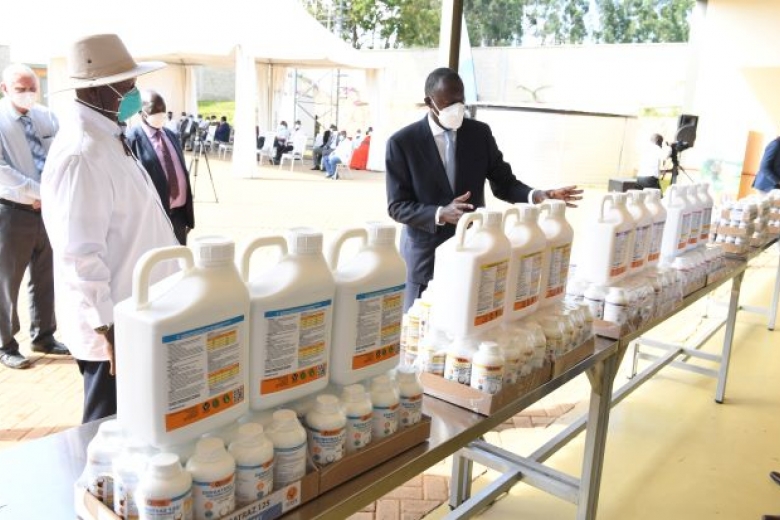 The factory which manufactures a variety of acaricides for spraying, drenched and orally administered to animals started operating in August (2021).

Among the drugs manufactured is Sangatraz 125 for ticks, mange, mites, lice, sheep scab; Sangatraz 250, which kills most animal vectors, Sangasupa which controls ticks, biting flies and houseflies, Sanga Delta that controls other vectors in addition to tsetse flies. Other drugs are Sangaphos, Sanga worm and fluke drench and Banish which is a wound remedy.

Speaking during the official launch on Saturday December 11, President Museveni noted that for many decades, animals especially cattle suffered from many diseases in the Southern part of the country cattle corridor because the caretakers lacked special attachment to the animals.

He said cows suffered a lot from trypanosomiasis that originated from Tanzania by 1918 and they were also affected by ticks that caused massive animal deaths in Uganda, the most affected area in Southern Uganda was Mpororo.

“It’s good that the young generation of the time including Enos Tumusiime and others from the Southern part of the country have today woken up to come to fight the problem of ticks that attack livestock causing common diseases,” he said.

The area called Sanga from which the name of the company and its products derive is located 17 miles from Mbarara City on Masaka road. It was popular for rearing particular types of Ankole cows and keeping heritage of the area where many herds perished.

Museveni said Sanga was known for the indeginous brands of cows including Ebikaaka big giant soft cows, Enshungye, the big tall cows and Enkome type that was stout but also a little bit smaller in size.

“The issue at hand is how to approach the war against the ticks that can be eliminated now. The factory should solve the problem. It’s also good that the stakeholders have come together to have a remedy against ticks,” Museveni, himself an ardent cattle farmer, said.

The president assured the investors that the government will support the company in what he called a “good war” to protect animals.

“We are going to work well together by accessing low interest loans from UDB. Government cannot fail to fund this vital venture,” he said.

The President said that among the drugs manufactured there is what is known as co-formulation, which is a mixture of a number of drugs whose application to animals creates exposure to all vectors/ticks that with time become resistant to treatment in use.

He observed that some types of drugs in co-formulation work under certain circumstances posing a challenge of requiring further research.

Mr. Enos Kagyendagura Tumusiime, the Director of Sanga Vet. Chen. Ltd, said it is estimated that 70℅ of livestock deaths are as a result of tick-borne diseases

“Around 2008, livestock farmers in the country realised that the acaricides were failing to combat ticks due to use of counterfeit acaricides and dewormers on the market, becoming a menace to livestock,” he said.

Mr. Tumusiime noted that the acaricides manufactured by Sanga Vet. Chem Ltd have been successfully tested on the farm. He said that the company is in partnership with experienced and specialised partners in the manufacture of animal drugs from Zimbabwe. Currently, the company employs 60 people and will in future at full production employ 300 people.