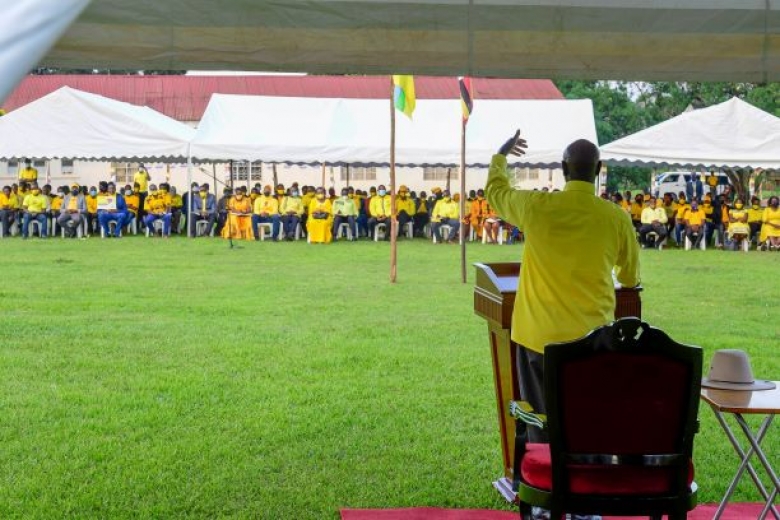 President Yoweri Museveni who is also the NRM Presidential flag bearer in the forthcoming general elections has advised youth leaders to be clear headed and acquire knowledge, if they desire to change and develop society.

“During the time of Jesus, the Romans were the ones in charge of Palestine, but in 450 AD because they were attacked by the people from German because they still had primitive ways of doing things. These were their dark ages. But in 1400AD, they were backed with knowledge on what to do and they began developing,” explained Mr. Museveni.

The President was speaking during a meeting with youth of greater Mbarara from the districts of Mbarara, Isingiro, Kazo, Ibanda, Kiruhura and Mbarara city.

He cautioned youths to shift from a money-less society of focusing on subsistence farming and engage in money making enterprises because they are non food needs which require money to attain them.

“Needs like medical care, transport, education, electricity are crucial which means you must start working for your pockets and not for the stomach alone. This will also help to increase your house hold incomes as well as food security,” he said.

“Look at the expenditure of your household for year, what assets does the family have, how can you use those assets to generate enough income that is either equal to or greater than the expenditure and finally how then can the government help you? he said.

He encouraged the youths to desist from carrying out land fragmentation as it was not profitable but to create shares from which they can save money through dividends. He said that this would help them earn from land as opposed to dividing and selling it.

In their memorandum presented to the President, the youth of greater Mbarara requested President Museveni to consider setting up a skilling centers in each sub- county of districts in the western region as job creation centres.

They told the President that there was need to buy value addition equipment in the agricultural sector which would encourage more youths to enter and participate in the sector and also bring about more jobs.

A request for more mobilization materials like t-shirts to be given for distribution in support of the NRM party was also made.

The youths thanked President Museveni for always recognizing the youths in Uganda and assured him of immense support in the coming elections. They reiterated that with their vigor, they would be able to walk door to door to mobilize for massive support.